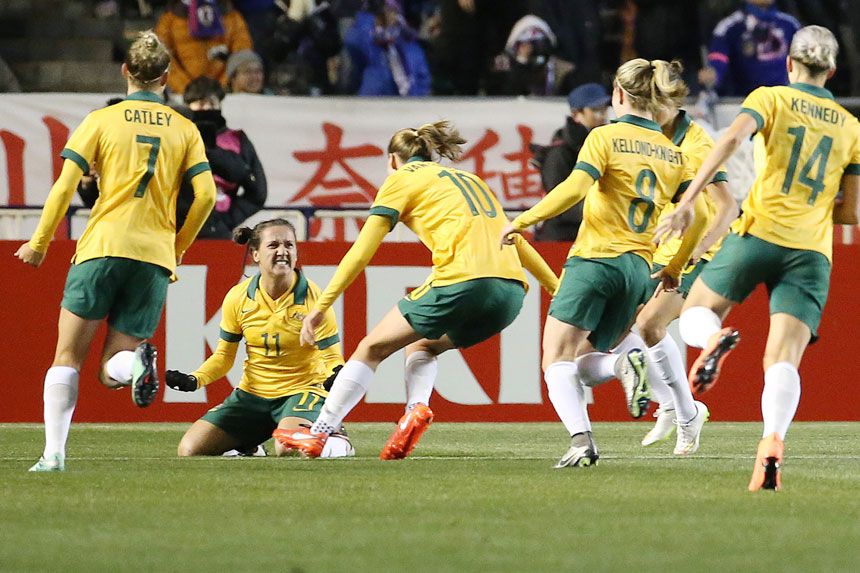 The Matildas enjoyed a large chunk of fortune in their otherwise excellent win over Japan overnight, thanks to a fortuitous deflection off the referee.

Australia’s excellent 3-1 win over Japan saw the Matildas take a big step towards qualifying for the Rio 2016 Olympics, but the build-up to their second goal saw the visitors enjoy a large slice of luck.

• Everything’s gone wrong, but they keep winning
• Cricket sixes event bowled over by sexism claims
• The greatest game of cricket you never saw

Down 1-0 after Lisa de Vanna’s first-half strike, Japan’s Mizuho Sakaguchi looked to play some keep-ball to help her team settle into a rhythm, but her cross-field pass struck Italian referee Carina Vitulano.

With the ball bobbling off the referee’s torso, de Vanna pounced to feed Katrina Gorry with a delightful through-ball, with Gorry finishing calmly to double the lead.

Watch the goal below

The deflection caused some consternation in the Japanese ranks, but ultimately it made little difference as Australia recorded a convincing win.

After the match, Matildas coach Alan Stajcic played down the result, saying there was still a long way to go to qualify for Rio.

“We’re not even close to qualifying yet,” Stajcic said.

“We have four more tough matches ahead, and this is a tournament where any team can beat any team.

“We will enjoy this for an hour or so, but then we will focus on our next match because if we think this is enough, then we won’t qualify.”

Only the top two teams in the six-team qualifying competition progress to Rio.

Stajcic said all the Matildas’ preparations leant on getting a result in their opening game to build a foundation for the qualifying campaign.

“We know of course that Japan are a world class opponent, and we prepared for many weeks for this match, and we wanted to play it at our tempo and rhythm, rather than what happened at the World Cup,” he said.

“I thought we did that very well and controlled good patches of the game and, even though Japan created some chances as well. I still think we were a threat and executed a lot better than we did six months ago and thoroughly deserved the win.”

Australia tops the standings after one game on goal difference, ahead of China (who beat Vietnam 2-0), while South Korea drew 1-1 with North Korea.