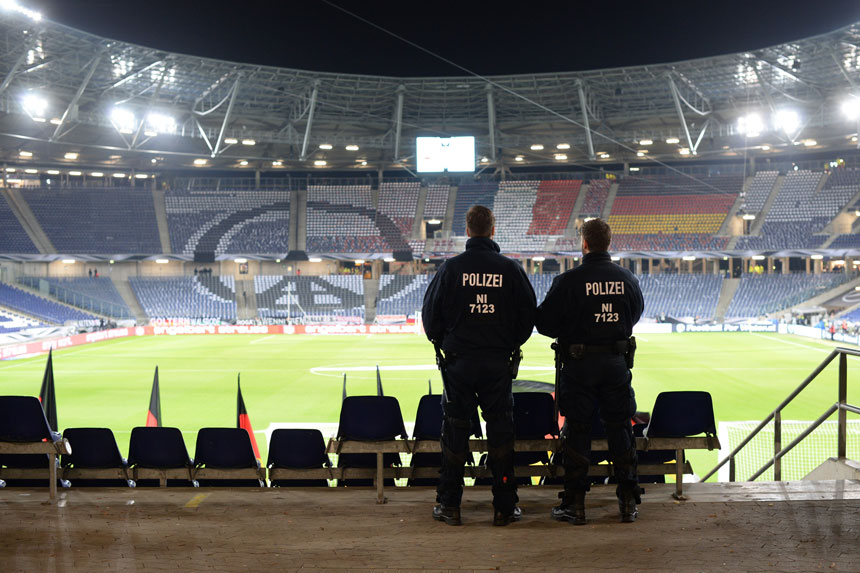 A friendly international between Germany and the Netherlands was called off 90 minutes before the planned kick-off on Tuesday (local time) after warnings of a possible attack targeting the game.

“We had concrete warnings that someone in the stadium wanted to detonate explosives,” Hannover chief of police Volker Kluwe told DPA.

The warning was sufficient to be taken seriously, the sources said.

And, according to unconfirmed reports, a truck, loaded with explosives, was disguised as an ambulance and attempted to enter the stadium.

The truck did not enter the venue, though, and Hannover’s swift response also saw the city’s train network shut down.

There were no explosives found in the stadium, Germany’s interior minister Thomas de Maiziere confirmed.

He is quoted as saying by Deutsche-Welle: “The indications of danger at today’s game grew over the course of evening so much that we urgently recommended the cancellation of the game.”

The interior minister for Lower Saxony, the region where the game was to be played, Boris Pistorius, added: “The game going on would have been irresponsible.”

The game would have been played four days after the terror attacks in Paris amid tight security.

On Friday (European time), several attackers wearing suicide belts blew themselves up outside the Stade de France as Germany played a friendly with France.

German Chancellor Angela Merkel and several senior cabinet members had been due to attend Tuesday’s match.

The stadium was sealed off for 30 minutes, earlier in the evening, after the discovery of a suspicious suitcase.

The stadium and some streets in the area were closed before police said the object posed no threat.

Klume later added: “We received a tip-off that after the first object was found, another attack had been planned. We had to take this seriously.”

Fans, who had started filling the HDI Arena for the game, were asked to leave in orderly fashion when the game was cancelled.

“Ladies and gentlemen, dear football friends. I am sorry but the game has been cancelled on short notice. Please remain calm! There is no imminent danger or anything else. Please go home in a normal way,” police said in an announcement over the stadium speaker system.

Extra police, many armed with automatic weapons, had been deployed for the game.

All available police officers were being deployed in Hannover, a police spokeswoman said without giving further details.

The German football federation (DFB) had considered calling off Tuesday’s match in the days ahead of the game.

However, federation and team officials agreed to go ahead with the game in solidarity with France and the relatives and victims of the Paris attacks.

The team was on its way from the hotel to the stadium and turned back when it was informed of the cancellation.

Belgium’s friendly with European champions Spain, scheduled for Tuesday, was also called off, late on Monday, in the wake of the attacks.

France are playing England in a friendly of their own at London’s Wembley Stadium on Tuesday (local time).

– with reporting from James Willoughby