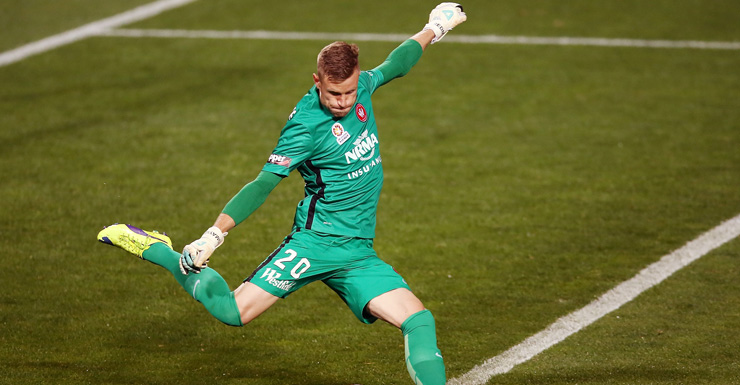 With a handful of Melbourne derbies to his name, Western Sydney goalkeeper Andrew Redmayne knows well the cauldron of a crosstown A-League battle.

But the ex-Melbourne City keeper expects this weekend’s showdown with Sydney FC to trump anything he’s ever experienced south of the border.

Last season, Redmayne was between the sticks for two of City’s fiery showdowns with championship-winning rivals Melbourne Victory, as well as numerous others in the two seasons prior for the club’s predecessor, Melbourne Heart.

But now, wearing the red and black, the 26-year-old is tipping his first Sydney derby in front of a likely sold-out crowd at Allianz Stadium on Saturday night to bring something extra.

“I think with the passion and the energy that the Wanderers fans bring, it’s going to be better than the Melbourne derby, that’s what I’m expecting,” Redmayne said before training on Tuesday.

“Derbies is what football is all about. That passion, that rivalry, almost the bragging rights I guess.

“There’s a lot more pressure and atmosphere, and sold-out crowds. Everyone’s on their feet. It’s just fantastic, and I just can’t wait to get out there.”

Redmayne signed with the Wanderers in the off-season, having been granted a release from City after losing his starting spot to Tando Velaphi.

They head into the showdown as underdogs, having not won this fixture in the last four attempts and winless in this season’s first two matches.

However the confidence of Tony Popovic’s radically overhauled side is bubbling after a promising performance in their 1-1 draw with Adelaide, and there’s a sense they are ready to tie up loose ends on their improving attack.

The match will also be a new encounter for Spanish midfielder Andreu, who went from zero to hero against the Reds last Friday when he followed his own goal with an equaliser.

Andreu experienced the derby atmosphere during his time with Polish side Polonia Warsaw, facing Legia Warsaw in the traditional Warsaw derby.

“But I think this derby will be better,” he said.

“I hear many things, (including) that it’s the best game in the league and a lot of people will be in the stadium – 40,000 or close.

“I like playing in these kinds of games because always the nerves are on yourself. It will be a special game and I hope we can get the three points.”