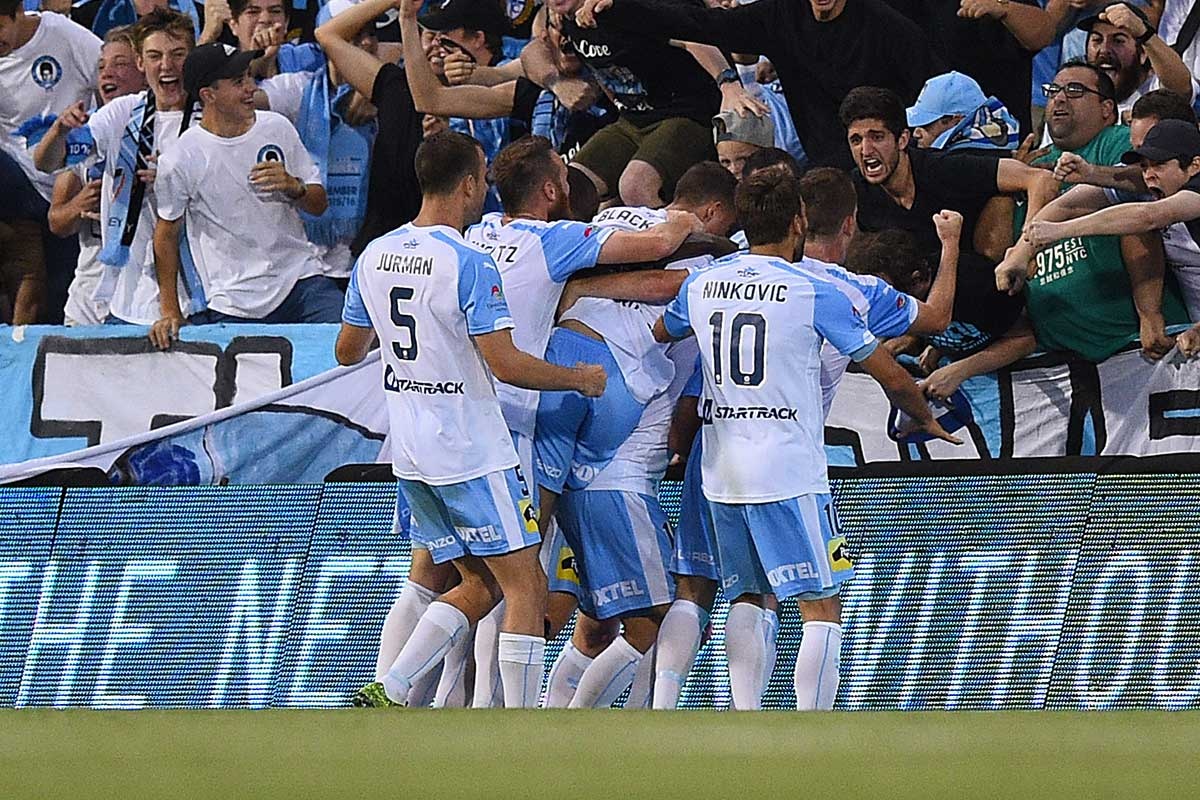 An 89th-minute header from skipper Alex Brosque has given Sydney FC a clutch 1-0 A-League win over a brave Newcastle outfit on Saturday evening.

Last year’s grand finalists looked headed for a frustrating share of the points when the veteran striker nodded home an Alex Gersbach corner at the near post, ruining Jets coach Scott Miller’s first match at home.

The last-ditch defeat is a kick in the teeth for the hosts, who had goalkeeper Mark Birighitti forced from the field midway through the second half after copping a boot to the face from Shane Smeltz.

It was a nasty collision when Birighitti bravely fielded a through ball in the 76th minute and was collected by Smeltz. After receiving attention from medical staff Birighitti was substituted for veteran gloveman Ben Kennedy.

The incident proved to be a crucial point in the match, given Birighitti had been a thorn in Sydney’s side.

The visitors enjoyed over 60 per cent of the possession but couldn’t find a way past the former Adelaide goalkeeper, who turned away at least five Sydney opportunities throughout the match.

After a see-sawing first half, Sydney’s dominance grew in the second, but struggled to find the final ball.

Even when they finally broke through, Smeltz blew a one-on-one chance with Kennedy late in the game and Brosque’s low shot cannoned off the woodwork.

However, Brosque’s late header gave his team the full three points, as well as an A-League record 16 straight games away from home without defeat.

The first chance of the night fell to Jets striker Milos Trifunovic, but his spectacular left-foot volley from a Enver Alivodic cross flew above the bar in the 8th minute.

A similar effort from Sydney speedster Chris Naumoff also strayed off-target, before Newcastle’s Labinot Haliti succumbed to a knee injury suffered from an awkward tackle by Jacques Faty earlier in the match.

The contest roared to life in the 28th minute when Birighitti produced back-to-back saves from a Sydney corner, including a reflex parry of a deft Milos Ninkovic touch.

His heroics looked to inspire the home side into an opening goal when Jason Hoffman nodded home from a set piece. However, the right-back was ruled offside.

An evenly-fought first half then almost ended horribly for the hosts when defender Ben Kantarovski was only handed a yellow card for a crude two-footed challenge on Naumoff.