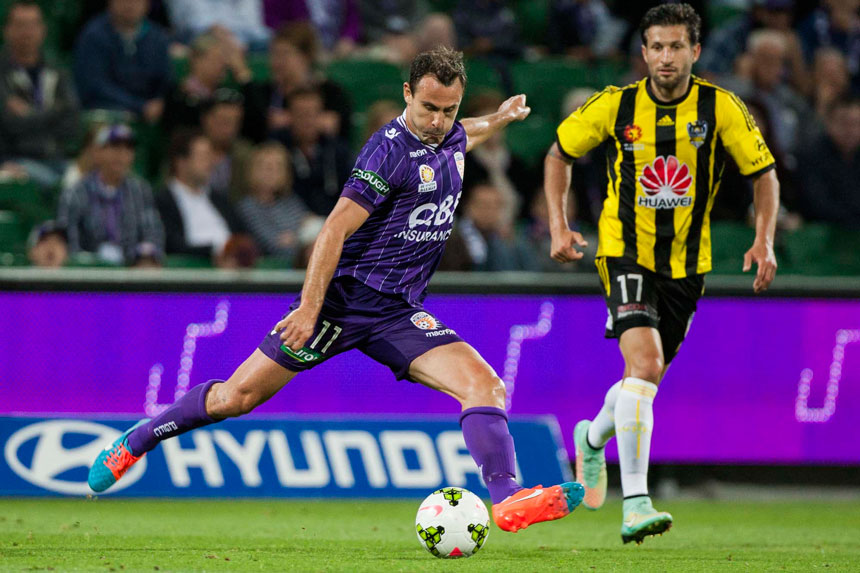 Ask any A-League club and they will tell you the long off-season is a drag.

For Perth Glory, humiliated in April when they were found guilty of systematically cheating the salary cap by $400,000, it has dragged on forever.

Just two matches of last season remained when Glory accepted their punishment – a ban from the finals when a first A-League title seemed a realistic chance, and a $269,000 fine – for the rort.

The fall-out was almost as extensive as the number of Perth’s salary cap breaches. Click the owl to see them all.

And for the last six months, devoid of regular matches to divert attention, Perth have been left to stew in their own misery.

So it’s little wonder they are raring to go ahead of a week that sees them host three matches at nib Stadium – their first since April – as two A-League fixtures are sandwiched by an FFA Cup semi-final against Melbourne City.

Even new CEO, Peter Filopoulos, himself in the chair for just nine weeks, is desperate to move on from the club’s problems of the past.

“It was a very long off-season for everyone on the back of what happened last season,” Filopoulos told The New Daily.

“It’s been a long time between drinks in terms of games in Perth and the start of the A-League will help us move forward.

“We’ve obviously got a lot of work to do to regain credibility – but we’ve got to do that through actions and not words.”

Filopoulos’ early actions have included a four-year business plan for the club, attending fan forums and freely engaging with fans on social media.

And he says lessons learned from crisis clubs in other sports will be applied.

“Do we want to respond like the Melbourne Storm did when they had a similar (salary cap rorting) situation at their club?” he said.

“They took it on the chin, dusted themselves off and moved forward strongly with very good on-field and off-field results.

“Or do we want to respond like the Essendon Football Club (still embroiled in a supplements saga), where in three or four years time, we’re still suffering the consequences of past actions?

“We want to respond like the Melbourne Storm did. We have drawn a line in the sand and we’re moving forward. We will do it as a club and as a community, together.

“We’ve got 5,000 members on board now, which is ahead of what we had at the same time last year, and we’ve got a full deck of sponsors.”

Filopoulos, who speaks with infectious enthusiasm about the club’s potential, will not rest easy.

“I believe Perth Glory is a gem waiting to be polished. Perth has set the benchmark in the past and I strongly believe we can do it again,” he said.

“We’re well on our way to our budgeted number of 6,000 members but, quite frankly, I think that a club like Perth Glory should be striving for 10,000 members plus.

“We also need to attract at least 15,000 to games. If we are strong financially, we can then make a serious play for some of the marquee players.

“The only way we are going to do that, though, is if the profit and loss of the business is self-sustainable.

“We can’t keep relying on a private owner (Tony Sage) to keep putting in the difference. It’s unsustainable.

“The club can only progress if we’re all inside the tent. If we’ve got people outside the tent, we want you inside. Please, come back.”

If they can meet Filopoulos’ crowd and member targets, Perth would make a ‘major play’ for marquee players like Socceroo star Tim Cahill, he says.

The Socceroos star recently said he was ‘highly unlikely’ to play in the A-League because he had never received an offer.

But for now, the new Glory boss is focused on their big week, and is quietly hopeful of a 10,000-strong crowd for Wellington’s visit.

Then it’s an FFA Cup semi-final for Perth, in what shapes as a crucial match for the club’s future. Victory and they’re in another Cup final.

And there would be no better way to start the club’s road to respectability – and their new era – by winning their first piece of silverware since 2004. How Perth Glory plan to tackle the road to respectability