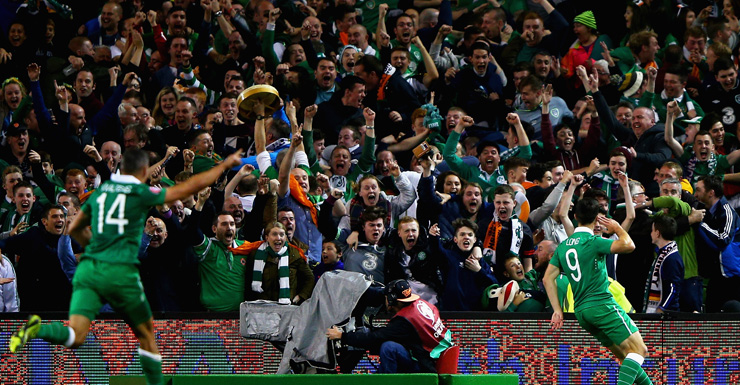 The Republic of Ireland football team has sent the country into wild celebrations thanks to a stunning 1-0 upset win over world champions Germany.

Southampton striker Shane Long scored the winning goal for the Republic of Ireland in the 70th minute of their 2016 European Championship qualifier on Friday morning (AEDT).

Long’s side are ranked 54th in the world, while Germany – winners of the 2014 FIFA World Cup – sit second.

Scroll down for the stunning goal that won the game

But Ireland got the job done over their star-studded opponents, with 39-year-old keeper Shay Given starting in goal and playing an important role.

Quote of the night went to the commentator on the English language broadcast, who made a raucous (and probably honest) announcement in his analysis of the goal.

“If that’s the winning goal … There will not be enough Guinness in Dublin to suffice,” ESPN commentator Craig Burley said.

Here’s the goal that won the game:

Germany dominated the game in front of 50,000-plus fans at Aviva Stadium in Dublin, but reports said “heroic” Irish defending thwarted the attempts of their high-fancied opponents.

The win sees the Republic of Ireland move to third in Group D of Euro 2016 qualification and they are equal on points with the second-placed Poland.

Group-toppers Germany still lead the group – by one point.

Euro 2016 gets underway in France in June next year.

‘There will not be enough Guinness in Dublin’ for this