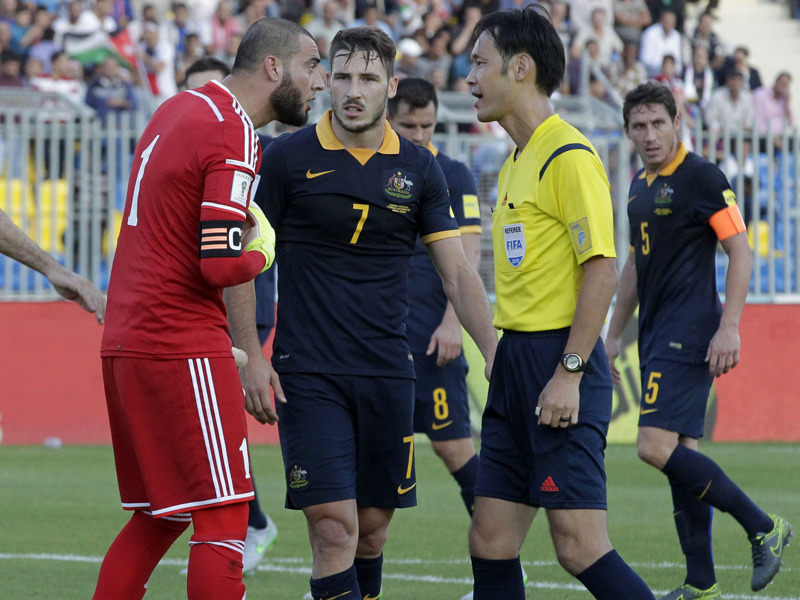 The Socceroos have lost their 2018 World Cup Qualifier against Jordan 2-0, at the Amman International Stadium on Friday morning (AEDT).

After a tense opening half, Ange Postecoglou’s men conceded both goals in a sloppy second half.

Hassan Abdel Fattah converted a penalty for the home side in the 47th minute, while Hamza Al Dardour doubled Jordan’s lead in the 84th minute.

Australian defender Matthew Spiranovic gave away the spot kick for Jordan’s first, while calamitous defending led to the second goal being conceded.

Jordan now sit on top of the World Cup qualifying group, one point ahead of the Socceroos in second.

The Middle Eastern side has become somewhat of a bogey team for Australia, with the Socceroos losing their previous away game in Jordan 2-1 at the same stadium in 2012.

The Socceroos best chances fell to striker Matthew Leckie in the first half, and midfielder Aaron Mooy in the second half.

Both efforts were denied by solid saves from the Jordanian keeper.

Socceroos coach Postecoglou told Fox Sports his side “lost control” of the match played in a hostile atmosphere.

“It was just disappointing to concede the first goal, it came from a long ball and we spoke about being wary of that,” Postecoglou said.

“Once they got a goal up the game became a little chaotic and we couldn’t get into any flow. We had a couple of chances but overall we lost control of the game.

“At the start of the second half we just lost concentration. Unfortunately we didn’t adjust and we conceded.

“When you come to a place like this, the first goal becomes critical. And you can’t get any flow in the game after that. And it gets frustrating for the players.”

Not even the introduction of attacking trio Tim Cahill, Tomi Juric and Nathan Burns could salvage anything for the Socceroos in the second half.

The Socceroos get the chance to make amends for the loss in Amman in November, when Kyrgyzstan visit Canberra.