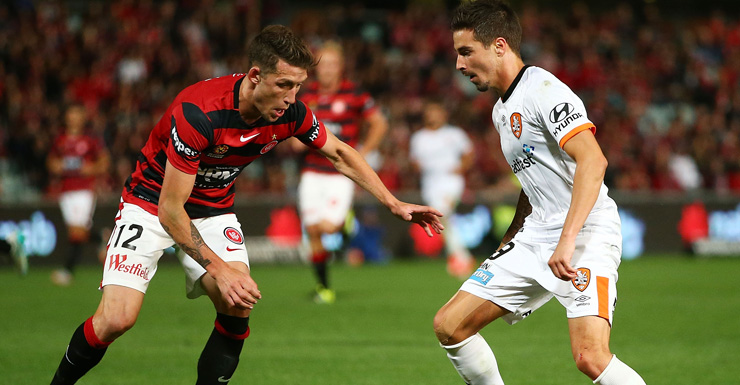 Brisbane Roar have kicked their A-League campaign off in style, steamrolling the Western Sydney Wanderers 3-1 in an entertaining but error-ridden season opener.

A rudderless defence and a swag of missed shots undermined the new-look Wanderers outfit in front of 14,122 fans at Pirtek Stadium on Thursday night.

It leaves the young franchise still without a round-one win in their short history, while new Roar coach John Aloisi will be glad he signed Jamie Maclaren, whose brace was complemented by a powerful header from a much-improved Daniel Bowles.

Maclaren’s first effort was the worst of a number of clangers from Tony Popovic’s men.

Centre-back Brendan Hamill attempted to hook the ball back to Andrew Redmayne but sold his keeper way short and left him stranded off his line, leaving ample space for the ex-Perth striker to lob it straight over his head.

The hosts equalised four minutes later when high-playing midfielder Mitch Nichols pounced on a Scott Jamieson drive and blasted past Brisbane goalkeeper Michael Theo, who dove but couldn’t get hands to the ball as it sailed past and tucked in near his far post.

Nichols nearly made it two but was controversially disallowed for handball by referee Jarred Gillet in the 35th minute.

Brisbane were sharp and purposeful throughout, charging forward and causing the Wanderers all sorts of hassles in their defensive third.

Notably impressive was new Spanish signing Corona, who owned the midfield and was the architect of corners that led to two of the three first-half goals.

Popovic had warned his near-unrecognisable side was a work in progress after last season’s torrid run.

There were glimpses of a more expansive style and they created chances, but their sights were amiss and they couldn’t undo the defensive blunders already made.

One such moment came when Maclaren scored his second off one of Corona’s set pieces in the 34th minute, rolling the ball over the line from 30cm out as five red and black shirts simply watched on.

New Wanderers marquee Federico Piovaccari will still have a point to prove, the Italian striker drifting out of position and missing key opportunities, including a sitter from a well-placed Romeo Castelen cross in the area which he sent towards the skies.

A clearly relieved Aloisi praised his side for getting it done on the field after a difficult pre-season plagued by financial woes.

“We still want to be able to control the game a little bit more, we didn’t do that enough tonight,” he said.

“But I think that we can also hurt teams on the counter if we have to, and we did that in the second half.”

Popovic was taking the positives from the chances his team created, but acknowledged there was work to be done on accuracy and defending set plays.