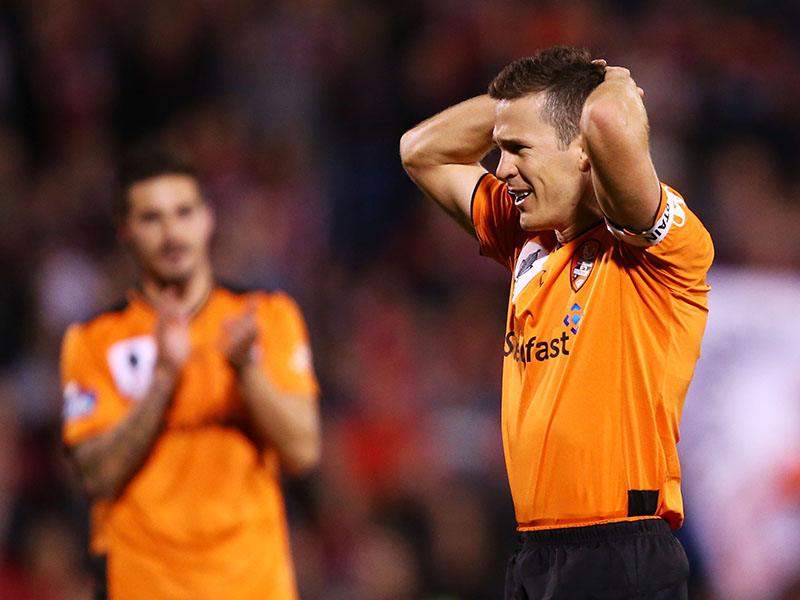 Australia’s premier soccer competition kicks off this week amid uncertainty over the future of the league’s second-most successful club, Brisbane Roar.

The winter break was filled with drama for the club and its debt-laden owner, the Djakarta-based Bakrie Group.

Brisbane’s lawyers were kept busy throughout August and September trying to stave off legal moves by unpaid creditors to wind up the club and liquidate its assets.

• Aloisi opens up about Brisbane Roar turmoil
• Messi, Ronaldo, Bale … Massimo Luongo? Player thought his nomination was a joke
• More than half of Iran’s women’s soccer team could be men

No one outside of the Brisbane franchise or the top ranks of Football Federation Australia (FFA) has an accurate handle on the club’s financial position.

However, we do know that the Bakrie Group is battling to service debts of around $8 billion and has limited resources to recapitalise the club.

Brisbane must repay at least $2 million to creditors, including former players and staff, before the end of January.

Two months ago, Roar chairman Chris Fong said Bakrie was planning to sell the club, but a lack of interest from potential buyers now means it is likely to stumble through the new season without a clear financial strategy.

On Tuesday, FFA chief executive David Gallop said the club had “been stabilised” but did not give any details of how its financial plight was being addressed.

Gallop’s latest comments are a stark contrast to his public attack on the club’s owners in late August when he warned that Bakrie’s A-League license could be stripped if the club was not recapitalised.

“This has been a terrible time for the players, coaches and staff, and the faithful members, fans and sponsors of the Brisbane Roar,” Gallop said in August.

“It also impacts the efforts of all other A-League clubs and their owners.”

Gallop’s frustration with the sad turn of events at the Roar is really a problem of FFA’s own making.

The decision to establish a new national competition in 2005 with each of the clubs under private ownership is the main reason why the A-League is the most financially unstable elite football tournament in the country.

The near-collapse of Brisbane and Newcastle Jets in the past 12 months seems to have more to do with big financial problems of each club’s owners, rather than the stand-alone business performance of the franchises.

The collapse of Nathan Tinkler’s mining and business empire meant that Newcastle Jets were left stranded two years ago when the club desperately required a capital injection.

Tinkler promised that he would replenish the club’s capital resources when he took the reins of the franchise but his financial travails meant the Jets were left under-resourced.

He says private ownership introduces business risks that member-owned franchises in the AFL and NRL do not have to contend with.

“The question that needs to be answered by the FFA is how well did it investigate the Bakrie business before granting it a license,” says Dr Heenan.

“It seems the risk management was not done properly and FFA chairman Frank Lowy has a bit to answer for, I think.”

“Culturally, it’s not a fit for Australian sport,” he says.

“Australian sport has a history and heritage of member-based business models.”

Professor Bob Stewart of Victoria University suspects that most A-League franchises are losing money and is equally concerned that FFA’s effort to improve governance in the sport does not include a requirement for the clubs to publish their financial accounts.

“There is a complete lack of financial transparency, and we can thus only assume that most of them are loss-making ventures held together by the investors’ generous funding arrangements,” Professor Stewart says.

“It therefore should come as no surprise when these investors no longer have a large surplus to subsidise their toy football clubs, and consequently pull the plug.”

Brisbane Roar’s financial demise seems counter-intuitive because it followed four years of on-field success, in which the club bagged two league titles for finishing on top of the competition at the end of the regular season in 2011 and 2014.

Professor Shilbury is pessimistic about the ability of A-League clubs to achieve financial sustainability.

“I’m not a fan of the private ownership model,” he says.

“Returning to a member-based model might bring more stability in terms of corporate governance but that won’t necessarily change the financial position of the sport.”

Professor Shilbury says televised A-League fixtures on SBS are not attracting sufficient audiences to haul in lucrative broadcast deals negotiated by the likes of the AFL and NRL.

“Once you’ve sucked out broadcast rights for the NRL, AFL and cricket there’s not much left for other sports,” he suggests.

“This economy is not big enough to sustain more than three or four big television deals.”

Dr Heenan believes the competition will face more headwinds this year with the viability of Central Coast Mariners likely to be tested.

He questions FFA’s rationale for establishing a club based at Gosford before entering a more logical market such as western Sydney.

“I would suggest that the Mariners might go the same way of the Newcastle Jets because the demographics of the area show that local support for a national franchise is not sustainable.”