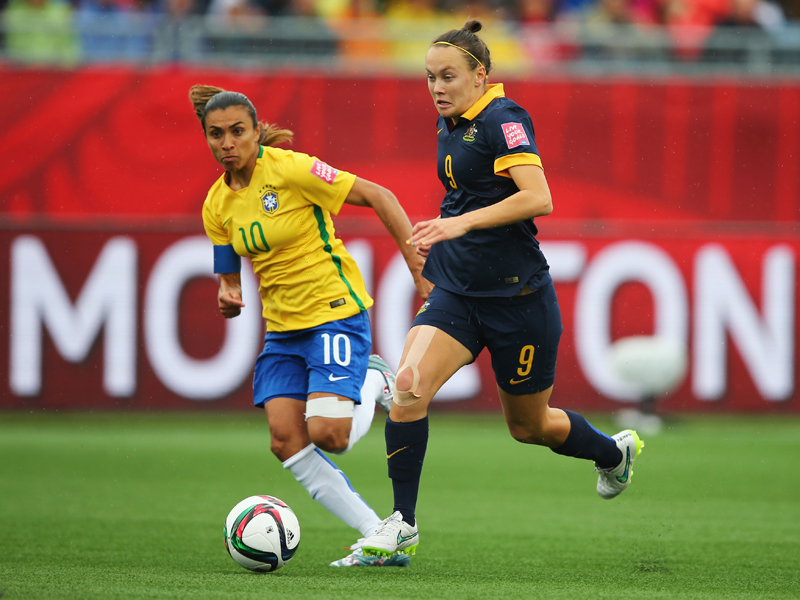 The ladies are as far into a senior World Cup tournament as any Australian team’s ever been and Foord says the “culture around the squad” makes Sunday’s (AEST) quarter-final with World Champions Japan less daunting.

“I play my best football when I am enjoying things,” Foord said. “There’s not one person that doesn’t get on with another in this team.”

“It’s the closest we’ve ever been and it makes it more enjoyable when you have 22 friends not just one or two.

“That definitely reflects on the field and it definitely helps. That’s showing in this World Cup.”

Speaking on the last day off before final training and meetings going into a do or die clash with Japan, Foord was enjoying the opportunity to recharge her batteries.

“It’s nice to take our mind away from it and try not to think about it too much,” she said.

“My nerves change from game to game. The first game against the US was probably the one I’ve been most nervous for.

“The others I have kind of just been more excited with only a little bit of nerves. I think I’ll be more excited than anything for Japan.”

The Matildas will play the game with almost three days more rest than Japan who won their Round of 16 game on Thursday (AEST).

As the Matildas go deeper into the World Cup their star is beginning to rise back home.

That’s something Foord says the squad are coming to terms with, “I don’t think we really realise how many girls look up to us”.

“When you meet one or two it’s a really great feeling to know you’re inspiring someone but I find it hard to believe being so young myself.

“I have kids that do look up to me and it is really cool but hard to believe it sometimes.

At 20, Foord is one of the youngest in the squad and at the 2011 World Cup she became the youngest ever World Cup player, lining up for The Matildas at 16.

Such is her youth and skill, she doesn’t have to work or study outside of soccer like some of her team mates.

In the W-League off-season when some players take a break and work more, Foord has a contract with Sky Blue FC in New Jersey.

“I’m kind of lucky in that way … I can’t say I want a real job anytime soon,” she jokes.”I’ve been fortunate to have a contract in the USA for the last three years.

“I probably should get studying or something soon but at the moment I’m not too motivated to those kinds of things. I am focusing on soccer.”

Some keener football viewers may have noticed the anomaly that is Foord’s number 9 jersey – given she is a defender.

Usually that number is reserved for the team’s best striker. However Matildas devotees will know she has played as a striker in the past year and previously when she was a junior.

“I was already number nine before that and that’s my favourite number playing football and I didn’t want to give that up.”

“It is unusual but that’s just my number now! It’s just stuck.”

Foord ready to hit the gas hard for Matildas