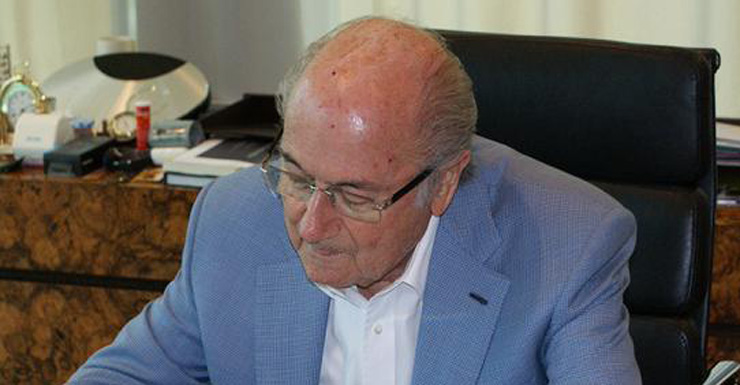 With his replacement months away, Blatter posted a photo of himself on Thursday sitting in a leather chair with a light blue jacket and no tie.

FIFA has been plunged into crisis for more than a week, ever since seven soccer officials were arrested at a luxury Zurich hotel ahead of the FIFA congress. They were among 14 people indicted by the US Department of Justice on corruption charges.

A law enforcement official, speaking on condition of anonymity, has said that the 79-year-old Blatter is a target of the investigation. Blatter has not been officially implicated in the case.

In his first statement since calling for new elections to find his successor, Blatter said he had met with FIFA audit panel chairman Domenico Scala “to establish a framework for action and a timetable” for his final months.

He made no mention of his status as a target of the American investigation. Instead, he kept the short statement focused on reforming an organisation he has presided over for 17 years.

“I want a comprehensive program of reform and I am very aware that only the FIFA Congress can pass these reforms,” Blatter said in the statement.

In a separate investigation, Swiss authorities are looking into the 2018 and 2022 World Cup bidding contests won by Russia and Qatar.

In his resignation speech on Tuesday, Blatter promised a final round of modernising reforms before leaving office. That includes finding a date for a presidential election by next March.

He also pledged to bring in term limits for his successor and FIFA executive committee members, and tougher integrity checks for election candidates.

Blatter’s statement came after separate investigations into soccer corruption were opened in South Africa and Australia, and after the headquarters of the Venezuelan Football Federation was raided by military intelligence officers.

The South African probe revolves around allegations of bribery related to the country’s winning bid for the 2010 World Cup, while Australian authorities are investigating corruption claims surrounding Australia’s failed bid for the 2022 World Cup.