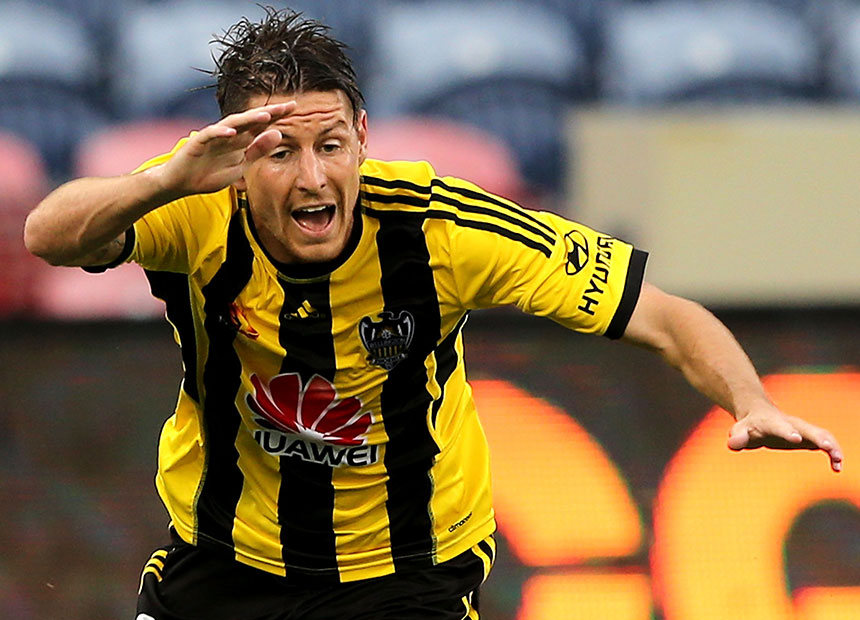 There hasn’t been a greater week for the Burns family name since Charles Montgomery debuted in a 1989 episode of The Simpsons.

His namesakes Down Under have both been chosen in their national squads for the Baggy Green and Socceroos respectively and, while Joe might get the opportunity to bat in cricket’s most famous Test on Boxing Day, it is Wellington Phoenix striker and former ‘next big thing’ of Australian football Nathan who could have the biggest impact.

Australia has had its fair share of top- to middle-order batsmen replace legends like Ricky Ponting, Matthew Hayden, Mike Hussey and Adam Gilchrist.

But replacements for top-shelf Socceroos strikers Tim Cahill, Harry Kewell, John Aloisi and Mark Viduka have floundered attempting to live up to their predecessors.

An 18-year-old Nathan Burns announced himself between 2006 and 2008 for Adelaide United, triggering incessant fawning from media and fans.

His pace, skill and direct approach to attacking prompted adornment as ‘the next Harry Kewell’ from a nation who searched desperately for generation next to pick up where the 2006 Socceroos left off.

With a host of overseas clubs wanting his signature, Burns signed for Greek giants AEK Athens in 2008 on a four-year contract.

He was loaned from Athens to second division Greek side Kerkyra, then moved to Korean club Incheon. He was loaned to Newcastle Jets in the 2013-14 season and, after interest from Melbourne Victory, he joined Wellington for two years at the start of this season.

During a period of 59 appearances overseas in six years he won seven caps for the Socceroos, his last coming before the 2011 Asian Cup.

Burns’ return to the A-League via Ernie Merrick’s unassuming Phoenix was relatively quiet given his once touted pedigree.

But as the team from the ‘Caketin’ began to surprise with wins against Central Coast, Western Sydney, Melbourne City and most recently Sydney FC, we have all been reminded of why Burns was so highly rated.

He leads the goal-scoring in the A-League with 10 from 11 starts, topping players such as Besart Berisha, Andy Keogh and Shane Smeltz.

He is the only striker in Australia’s 23-man squad who is scoring regularly and Ange Postecoglou has always maintained form is the key to cracking his starting XI.

The Asian Cup in January on home soil is the perfect opportunity for Burns to step up and grab the Socceroos No. 9 role, which Australians should be begging for Tim Cahill to hand over.

There’s no better time for the attacking baton of the national team to be truly passed on and Nathan Burns is the final piece in the jigsaw.

He should be deployed as the central figure in the Socceroos strike force, flanked by two of James Troisi, Robbie Kruse, Matthew Leckie and Tommy Oar.

With seven A-League players in the 23 and Postecoglou’s banishing of the Holger Osieck and Pim Verbeek ‘A-League ain’t good enough’ attitude, Burns should be trusted as our No. 9.

As we know well, Cahill will be waiting in the wings ready to save us off the bench if needed.

But there should be little worry that 26-year-old Burns will let us down.

Why this man must replace Cahill