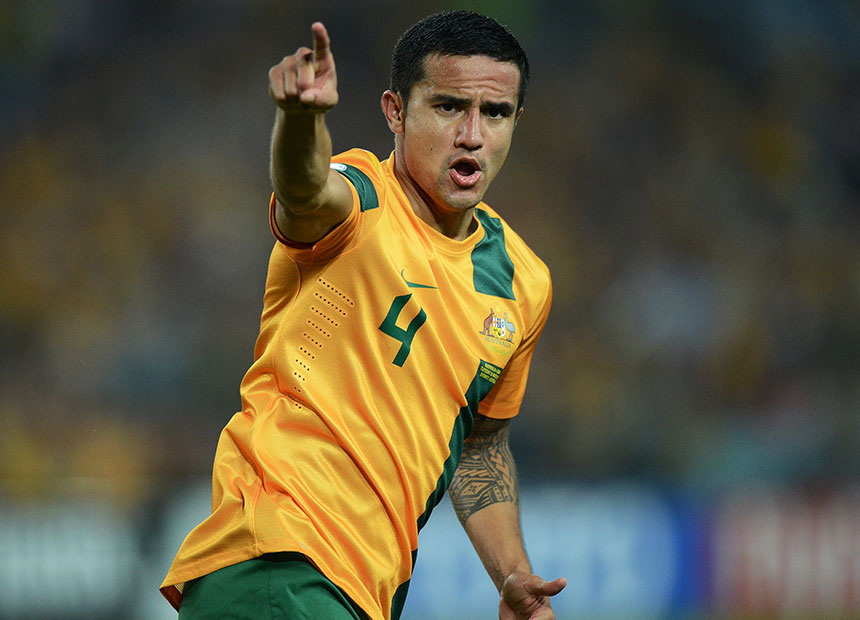 Comments from the evergreen attacker suggest he will still be playing when Russia 2018 rolls around.

Pele, Sir Bobby Charlton and Maradona have all gone to four World Cups.  Could Cahill join them?

While Cahill didn’t plainly state he wanted to be a part of the next World Cup, he made it clear his career isn’t winding down just yet.

“The next decision I make (for a club) will still allow me to play internationally,” Cahill said.

“I’d like to say that the next contract I sign will be two to three years minimum – with a vision.

“To be totally honest, I could have gone back to the Premier League on loan after the World Cup.”

Cahill’s observation has been reported as a ‘welcome move’ for Socceroos fans, but surely the sight of a 38-year-old Cahill still needed in the green and gold is not ideal for Australian soccer.

The Socceroos fall back on Cahill’s aerial prowess for goals too regularly – eight of the 12 scored in Ange Postecoglou’s coaching reign have come from the New York Red Bull.

This has highlighted the failure of the nation to produce a world-class attacker to lead the Socceroos’ line since Mark Viduka’s last cap in 2007.

The mere fact it is being suggested Cahill could go to Russia is a stark reminder of how the generation of players who should be appearing for the Socceroos now were done a disservice when the A-League was set up.

In the lag time between the NSL being dissolved in 2004 to the A-League starting in 2005, players now aged 26-30 missed valuable game time.

Moreover, they found it tough to get minutes or contracts with A-League clubs in early seasons as the new franchises opted for more reliable senior players.

The A-League still lacks a proper youth structure, adding to the development problem. While much has been done recently to revamp our youth player pathways, there is no doubt the NSL’s grassroots approach – with each club having extensive junior ranks – worked much better. See the 2006 ‘Golden Generation’.

Cahill’s continual importance is both a symptom of that anomaly plus his incredible work ethic and skill.

Some of the strikers who have shown promise but failed to grab the role of spearhead in Viduka’s wake include Scott McDonald, Nathan Burns, Bruce Djite, Alex Brosque, Josh Kennedy and Nikita Rukavytsya.

Cahill is the obvious exception. His grip on the national team is both vital and concerning, which speaks to the attacking problems Postecoglou has.

While it is inspiring to watch Cahill’s feats, there is always a lingering feeling of foreboding and frustration that he provides so many of our goals.

Only 27 players in the 84-year history of the FIFA World Cup have played in four tournaments while only two – Antonio Carbajal (Mexico) and Lothar Matthaus (Germany) – have been to five.

Very rarely has an Australian sportsman brought a following so much joy, or been so universally loved.

That admiration has blinded us a little too long and even though it may hurt, for the good of the team, Australian football fans should demand that a 38-year-old Cahill isn’t playing in Russia.

Russia with love? Our Cahill affair must end