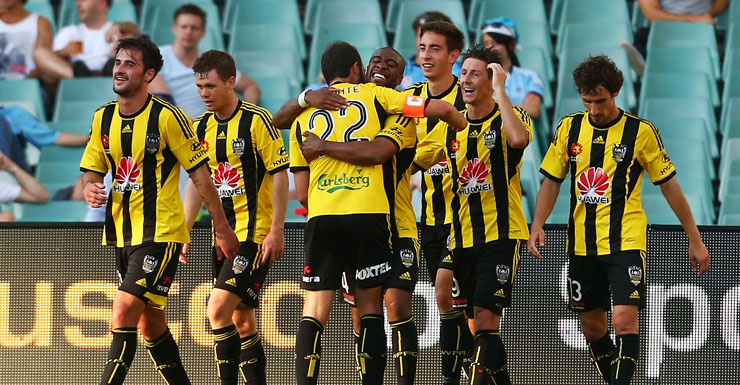 Nathan Burns has played himself into Asian Cup contention after slotting a double to guide Wellington Phoenix to a 2-0 A-League win over Sydney FC at Allianz Stadium.

The Phoenix jumped the Sky Blues into fourth spot on the ladder, the highlight Burns’ wonderful individual effort to beat two defenders for his first goal in the 73rd minute.

The Wellington striker grabbed a second eight minutes later when he punished Sydney FC for a bad turnover to seal the Phoenix’s sixth win of the season.

Burns leads the league’s goal scoring chart with 10 goals and will now be in Ange Postecoglou’s thinking for the Socceroos’ Asian Cup campaign on home soil.

Sydney FC were the better side for most of the match but could not convert a host of chances in the first half and wilted in the second 45 minutes.

Graham Arnold would have counted his team unlucky with the score 0-0 at halftime.

The Sky Blues undoubtedly had the better of the first stanza, holding 61 per cent of possession and having eights shots on goal to Wellington’s three.

The Phoenix defence did astonishingly well to turn away a Sydney FC raid in the 29th minute. First Wellington goalkeeper Glen Moss produced a super save on a Shane Smeltz shot from point-blank range before Marc Janko’s follow-up attempt sailed over the crossbar.

The Phoenix had a right to feel hard done by when Roy Krishna was called offside by the assistant referee, denying him a chance to score in a fifth successive game.

However the Phoenix grabbed control of the match in the second half with Burns, who was a constant threat down the left side.

Before the match there was a minute’s silence for the victims of the Martin Place siege and the club’s supporter bay held up a banner reading “Love unites this city”.