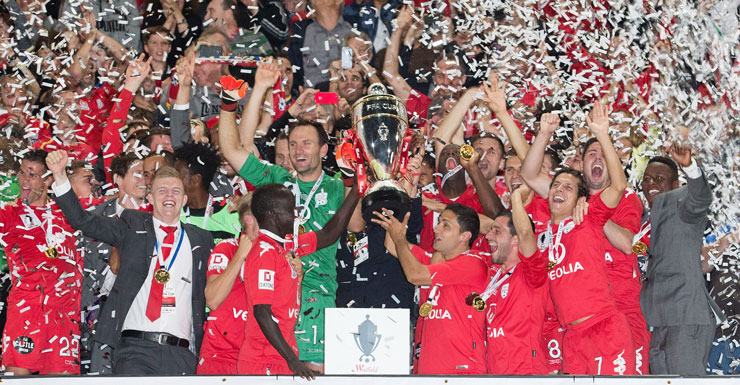 A dominant Adelaide United has won the inaugural FFA Cup final thanks to a 1-0 win over 10-man Perth Glory at Hindmarsh Stadium.

Sergio Cirio scored the historic goal as Adelaide United’s signature passing play proved too much for the A-League leading Glory in front of 16,142 fans in Adelaide on Tuesday night.

It was Adelaide’s first piece of silverware since winning the A-League Premier’s Plate in 2005-06 – and coach Josep Gombau’s first title in Australia – while the Glory’s trophy wait since its 2004 NSL title win goes on.

• A-League Round 10: what you need to know
• Wanderers swept away

Perth Glory’s job was made even harder when Joshua Risdon received his marching orders for a second yellow card after a cynical shirt tug on Cirio 58 minutes into the match.

The Perth side had relied on a counter-attacking strategy throughout the game up to that point but began to struggle after it was reduced to 10 men.

Adelaide United capitalised when Cirio burst into the area to round keeper Daniel Vukovic before finishing from an incredibly sharp angle.

It was his sixth goal of the competition and ninth of the season so far.

The Reds proceeded to dominate the majority of scoring chances for the remainder of the match.

Substitute Fabio Ferreira looked to dink a cross in but the onrushing Bruce Djite could not reach it, before a Marcelo Carrusca free kick from 30 yards out comfortably sailed over the crossbar.

The Glory had one chance late on with Andy Keogh’s free kick from the left flank, but it was well punched away by Eugene Galekovic under pressure in a crowded area.

Glory keeper Vukovic then tipped over from a long-distance thunderbolt from Isaias, before Cirio failed to get a shot away as United passed the ball almost at will in Perth’s area.

The first half saw Adelaide emerge as the game’s dominant force, with Awer Mabil and Sergio Cirio providing the Reds’ best outlet.

A Mabil cross from the right flank saw Glory captain Michael Thwaite inexplicably step over the ball, allowing James Jeggo to claim possession in the box, only for his attempted slalom through the area to be cleared by the Perth defence.

Full-back Tarek Elrich’s charge down the left flank saw him hauled down by Richard Garcia for the Glory’s first yellow card of the day, before Risdon went into the referee’s book soon after for a cruncing tackle on Cirio.

Adelaide’s best chance of the first stanza came when Bruce Djite intercepted a slack Glory pass to spring a counter-attack, feeding Mabil on the right as the winger blasted his attempt over the crossbar.

An Adelaide goal looked on the cards early in the second half as a wonderful jinking run from Cirio saw him weave past three defenders before offloading to Mabil, who shot over from close range.

Jeggo had an effort from outside the box shortly after, but the shot was blocked by Perth defender Dino Djulbic.