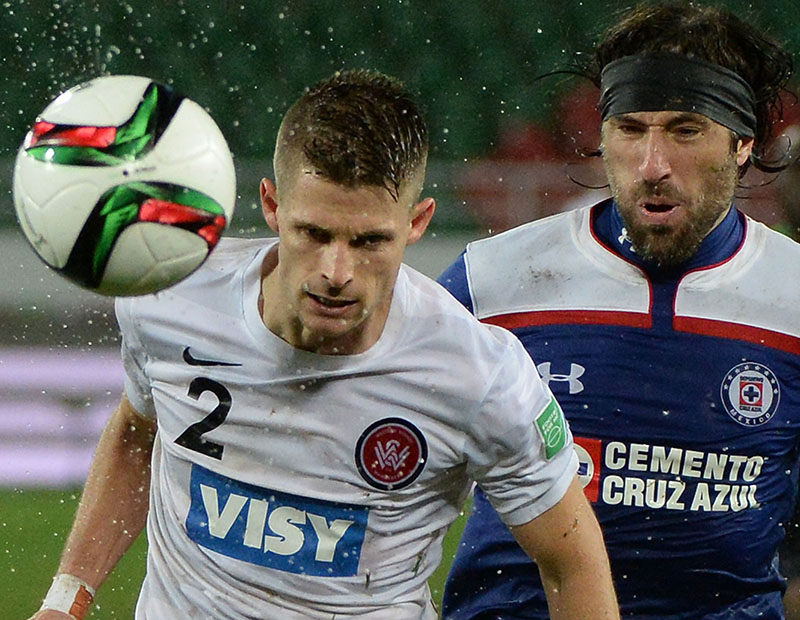 Western Sydney’s dreams of facing Real Madrid have been washed away in controversial circumstances, suffering a 3-1 extra-time loss to Mexican side Cruz Azul in near-unplayable conditions at the Club World Cup.

Saturday’s quarter-final in Rabat, Morocco effectively became a lottery after monsoon-like rain drenched what was already a poor quality pitch.

The Asian champions showed plenty of grit early but finished with nine men after centre backs Matthew Spiranovic and Nikolai Topor-Stanley were sent off, the latter in farcical scenes in extra-time amid a case of mistaken identity.

Cruelly, the Wanderers were just two minutes away from winning in regular time to secure a dream match-up with Cristiano Ronaldo and his star teammates.

Tony Popovic’s side led after a long-range stunner from midfielder Iacopo La Rocca midway through the second half before and 88th-minute penalty from Cruz Azul captain Gerardo Torrado sent the match into extra-time.

Wanderers captain Topor-Stanley was sent off to leave the Wanderers down to nine men late in the first period of extra-time before goals by veteran striker Mariano Pavone and Torrado sealed the win for the six-time North American champions.

Cruz Azul will now face Real Madrid in the semi-finals while the Wanderers will face Algeria’s ES Setif for fifth place after the African champions were sensationally beaten 1-0 by New Zealand minnows Auckland City.

Western Sydney, who qualified with their historic Asian Champions League triumph last month, defied their poor A-League form and a pre-match pay dispute to push heavily-favoured Cruz Azul all the way – though the conditions were a genuine leveller.

There had already been concerns over the quality of the Prince Moulay Abdellah Stadium leading into the match but the pre-match deluge turned it into a nightmare for the players.

With sections of the field completely waterlogged, attacking fluency was virtually impossible as the ball stuck in parts and skidded in others.

Unsurprisingly, both teams struggled to come to grips with conditions early, though there were several clear cut chances in the first half.

Labinot Haliti was preferred in attack to Tomi Juric but the best chance for either team in the first half fell to Wanderers centre back Matthew Spiranovic in the 11th minute.

The Socceroos defender found himself unmarked from a dangerous Mark Bridge free kick but his close-range header straight at Jose Corona.

Cruz Azul grew into the game as the half went on with Pavone squandering a couple of decent opportunities.

Despite halftime murmurs the remainder of the game could be postponed, the players returned for the second half.

The Mexican side began to threaten with regularity and Spiranovic kept the Wanderers in the fight, making a crucial goal-line stop in the 63rd minute after Ante Covic was beaten.

And La Rocca made it count just two minutes later, beating Corona with a speculative, skidding effort from almost 30 metres out.

A string of stunning saves by Covic kept the Wanderers in the match but the job of holding on was made tougher when Spiranovic saw a second yellow in the 74th minute for handling the ball.

The increasing pressure from Cruz finally told when Marco Fabian was fouled in the box by substitute Shannon Cole in the box and Torrado stepped to send the match to extra time.

Western Sydney were expectedly under heavy pressure throughout extra-time and their job looked to become impossible when Topor-Stanley was sent off for a second yellow, despite the first being mistakenly registered in his name instead of Seyi Adeleke’s for a 57th minute foul.

Under relentless pressure, the Wanderers conceded twice in the second period of extra-time with Pavone pouncing on a loose ball and Torrado slotting his second penalty of the game.