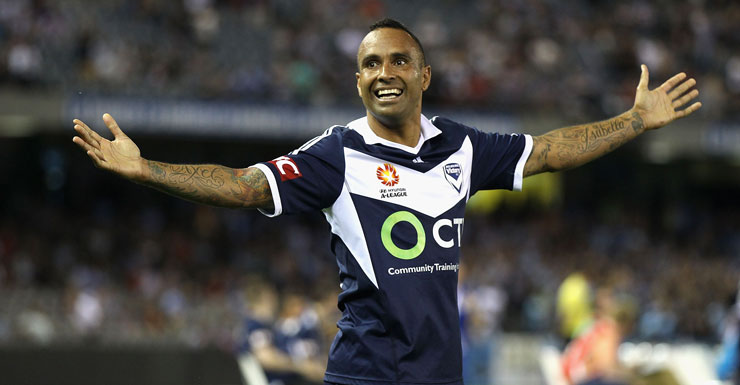 Etihad Stadium has seen some world-class performances in football, AFL, rugby, cricket and even musical acts U2, Bruce Springsteen and AC/DC since it opened in 2000.

Archie Thompson and Shane Smeltz’s striking masterclass on Saturday was of such vintage.

Thompson’s hat-trick is remarkable for the quality of his finishes, the role he played in the build-up to the goals, the fact he wasn’t the side’s nominated striker and because of his 35-year-old body.

For Smeltz, it was a reminder to the A-League of what a player he is with 74 goals in 141 A-League matches – plus a strike against Italy for New Zealand at the 2010 World Cup.

His flick to assist Marc Janko for Sydney’s opener was sublime, as was the goal from the corner. Very rarely do you see a player scoring a header when making their run away from the goal and not toward it.

Who needs underwhelming marquee players like David Villa, Robbie Fowler and even Harry Kewell when those already here can produce this?

Did everyone forget about the ‘Slippery Fish’ when looking for Berisha replacements?

In 10 games this season Henrique (aka the ‘Slippery Fish’) has already reached his highest tally for goals in his six previous seasons here.

Brisbane are now in the top six, one point above Melbourne City, who have a game in hand.

Despite losing to City last round, Brisbane has looked a much better side even though they started this year poorly.

Now they’ve defeated Adelaide United away they can really start to claim that they are back in the race this season.

The Roar can thank their Brazilian striker for much of that given he has scored a winning goal twice, against the Wanderers and Adelaide respectively.

He also salvaged them a point against in-form Perth Glory and a hat-trick in a drubbing of Newcastle Jets.

While many chose to focus outward in the search to replace talisman Besart Berisha it seems that they only had to look within to find another striking saviour.

Is Ernie Merrick the king of the surprise signing?

Although this time he may have done better, with the lure of football at Wellington arguably not as attractive as Melbourne.

Any side would kill to have a Kenny Cunningham, Roly Bonevacia, Roy Krishna, Nathan Burns or Michael McGlinchey now.

McGlinchey was really the only one of that bunch who could be considered a big signing of a proven A-League player, so you’ve got to admire Merrick and Wellington’s nous.

Recruiting is so important in the A-League as those struggling this year (City, Wanderers, Jets, Mariners) have all made predominately poor signings, so Merrick’s work has played a big part in Wellington’s rise.

A-League Round 10: what you need to know