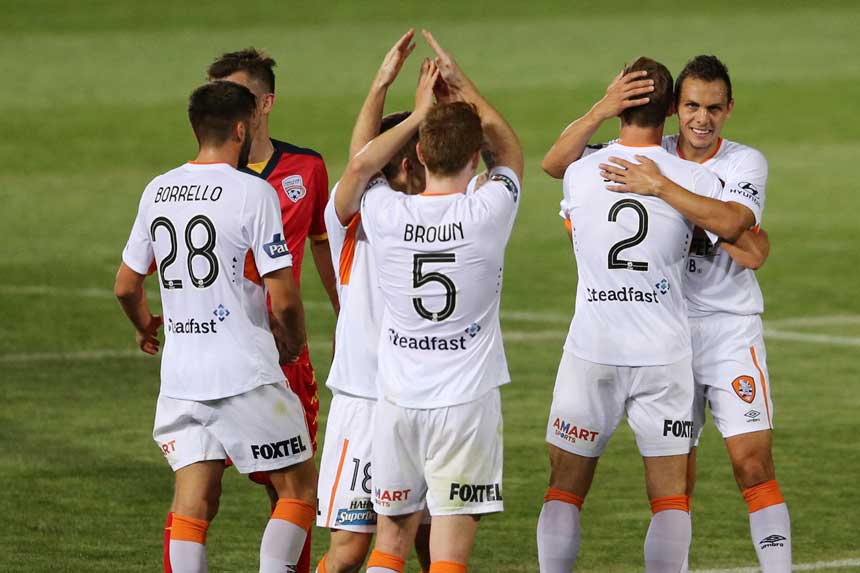 Smith, who signed with Thai Premier League side FC Bangkok Glass this week, had to watch on from the bench as Henrique’s stunning first-half strike was enough to give the Roar their second win in four games under Thijssen.

The Roar skipper eventually entered the fray with only a minute to play in regular time.

Barely 40 seconds were on the clock when Craig Goodwin steamed forward for the hosts and whipped across a low ball that was just beyond the reach of Fabio Ferreira.

United defender Tarek Elrich’s blushes were spared in the fifth minute when the woodwork came to his rescue after almost turning Roar winger Dimitri Petratos’s cross into his own net.

After stemming an early onslaught, Brisbane took the lead on 18 minutes through Henrique’s brilliance.

The Brazilian exploited space on the edge of United’s area before curving a shot that struck the inside of the framework and nestled into the top, far corner of the net.

Brisbane could have added a second three minutes later when Henrique and Petratos had just two Reds defenders to beat, but the latter rattled his shot into the post and lacked composure when he blasted his follow-up effort over the bar.

Ferreira flashed a dangerous delivery across the face of the goal that was inches away from Cirio levelling proceedings, before Henrique was forced from the ground with injury shortly prior to half-time.

Cirio again could have equalised for Adelaide on 57 minutes when he drove into the Roar’s area following Bruce Djite’s timely interception, but the Spaniard drove his shot wide.

A quickly taken set-piece had Ferreira in behind the visitors’ rear-guard, but goalkeeper Jamie Young made an important stop.

Pablo Sanchez should have grabbed a point at the death for Adelaide when he was put through one-on-one with Young, but the 31-year-old hit a tame shot straight at the gloveman.