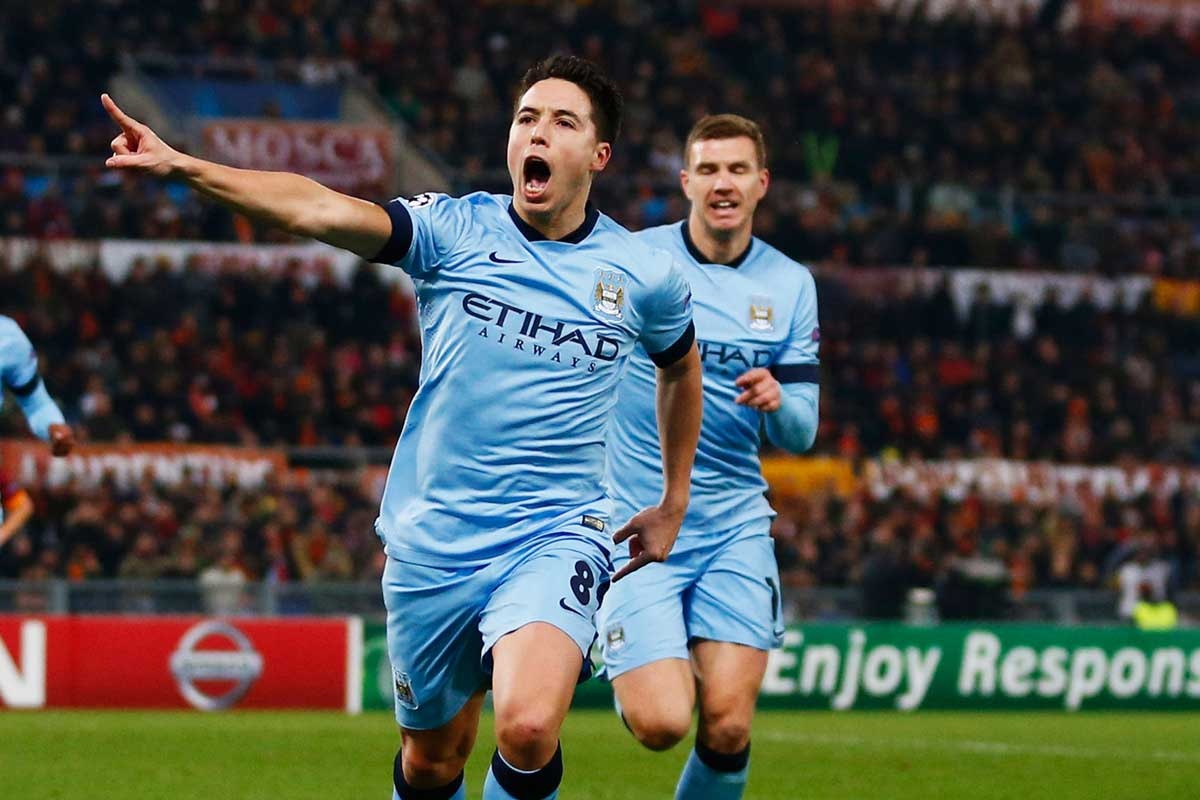 Manchester City have grabbed a spot in the Champions League last 16 with a tough 2-0 win over Roma in the Italian capital.

City had been underwhelming in the first five games of their Group E campaign and were left needing victory on Thursday (AEDT) to have any chance to advance to the knockout stages.

Roma had more of the possession and more shots on goal at the Stadio Olympico, and it looked for the first hour of play as if Manuel Pellegrini’s men were destined to depart the competition.

• Wanderers may boycott Cup unless pay dispute is resolved

However French midfielder Samir Nasri gave his side the lead in the 60th minute with a brilliant right-foot strike from distance that flew past Roma keeper Morgan de Sanctis.

Roma was then made to chase the game, and the Rossoneri had a number of chances which went agonisingly wide or were saved by City stopper Joe Hart.

Defender Pablo Zabaleta made sure of the win in the 86th minute when Nasri turned provider to set up his low right-foot shot into the corner of the net.

In the other Group E match, Bayern Munich won their fifth game out of six with a 3-0 home victory over CSKA Moscow.

German striker Thomas Mueller scored from the penalty spot in the 18th minute, before late goals from defender Sebastian Rode and Mario Gotze completed the scoring.

In Group F, Barcelona came out on top in a cracking contest to beat Paris Saint-German 3-1 at the Nou Camp Stadium to top the group.

The Catalans went behind to a goal from Zlatan Ibrahmovic in the 15th minute, but Argentine superstar Lionel Messi responded four minutes later.

Barcelona went ahead just before half-time when Neymar curled a right foot shot into the net from outside the box to make it 2-1 at the break.

Luis Suarez made sure of the points in the 77th minute, when he scored his first goal at home since joining Barcelona from Liverpool.

In a battle of the also-rans, Ajax made short work of Cypriot club APOEL Nicosia, winning 4-0 at home in the other match in the group.

In Group G, Chelsea completed their dominance with a 3-1 home win over Sporting Lisbon at Stamford Bridge.

The Blues, already assured of top spot before the game, quickly went ahead through an early Cesc Fabregas penalty, then doubled their lead with an Andre Schurrle goal after 19 minutes.

Jonathan Silva pulled one back for Sporting in the 50th minute, but John Obi Mikel completed the scoring in the 56th minute.

In the other game, Schalke leapfrogged Sporting to seal a spot in the last 16 with a 1-0 away win over NK Maribor with a second-half goal from Maximilian Meyer.

In Group H, FC Porto and Shakhtar Donetsk went through as Porto maintained an unbeaten record with a 1-1 draw at home to Shakhtar.

On Wednesday (AEDT), Groups A to D were finalised, with Atletico Madrid and Juventus qualifying from Group A, Real Madrid and FC Basel going through from Group B, AS Monaco and Bayer Leverkusen advancing from Group C and Borussia Dortmund sealing spots in the last 16 from Group D.

The draw for the first knockout stage will take place on December 16 (AEDT).