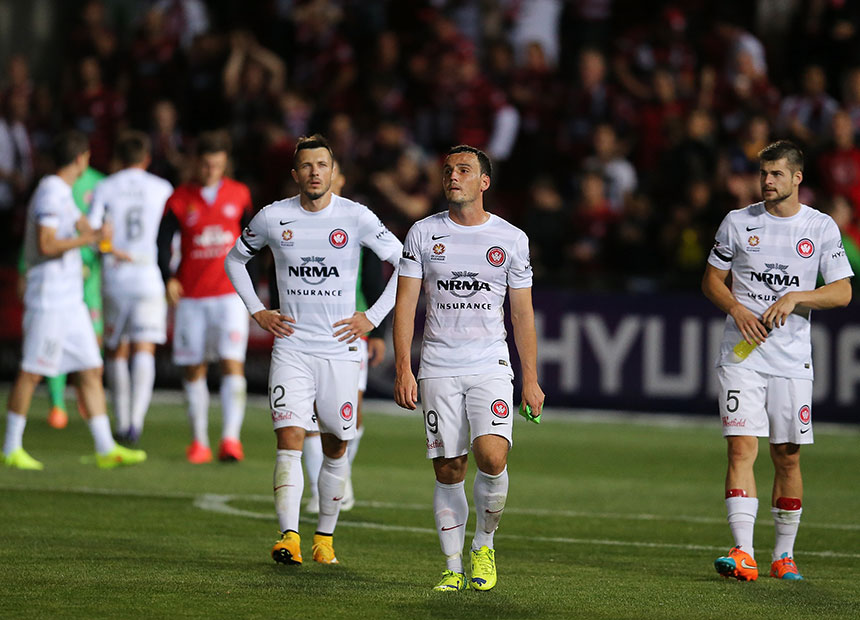 Western Sydney players set off for the FIFA Club World Cup in Morocco on Sunday night but doubts still linger over the A-League side’s participation because of a pay dispute.

Wanderers players from their weekend loss to Adelaide left Sydney bound for northern Africa after initial suggestions the group may not travel.

• From Asian champs to A-League chumps

The issue stems from the club’s offer to pay players just a 10 per cent share of the minimum $US1million ($A1.2m) they made for qualifying for the tournament.

A spokesperson for the Professional Footballers’ Association (PFA) said the players left for Morocco as a “sign of good faith” and were essentially allowing the club some more time to come to the table.

The footballers are seeking 50 per cent of any money made from the tournament, in line with what had been negotiated in a collective bargaining agreement.

The sticking point with the club is that the wording of the agreement only extends to the Asian Champions League – a point the PFA steadfastly argued against in a statement on Sunday night.

“In the course of these negotiations, the club made it clear to the players that its interpretation of the CBA was that the obligation to share 50 per cent of prize money did not apply to the FIFA Club World Cup,” PFA chief executive Adam Vivian wrote.

“The club has insisted on sharing only 10 per cent of its guaranteed payment of US$1,000,000 with the players, a percentage which is without precedent.

“This technical interpretation by the club defeats the letter as well as the spirit and intent of the CBA.”

While the PFA is hopeful of bringing Wanderers officials to the bargaining table in the coming days – the side’s first match of the World Club Cup is against North/Central American champions Cruz Azul on December 13 – the Western Sydney side is expected to struggle in Morocco regardless.

Domestically, Tony Popovic’s men have no wins and three draws in their nine matches this season.

The Wanderers’ latest defeat came in Adelaide on Saturday night, with goals to Marcelo Carrusca and Fabio Ferreira.

The statistics damned Western Sydney far more than the 2-0 scoreline.

The Wanderers were joined on the losers’ list by the other NSW clubs – each losing on home soil.

Melbourne Victory scored three goals in 11 minutes to defeat Central Coast, before the Phoenix put Newcastle to the sword with three goals in six minutes.

Capping the round, Melbourne City earned their first home win as a rebranded side, in a lacklustre 1-0 result over Brisbane Roar.

Wanderers in disarray, on and off the pitch