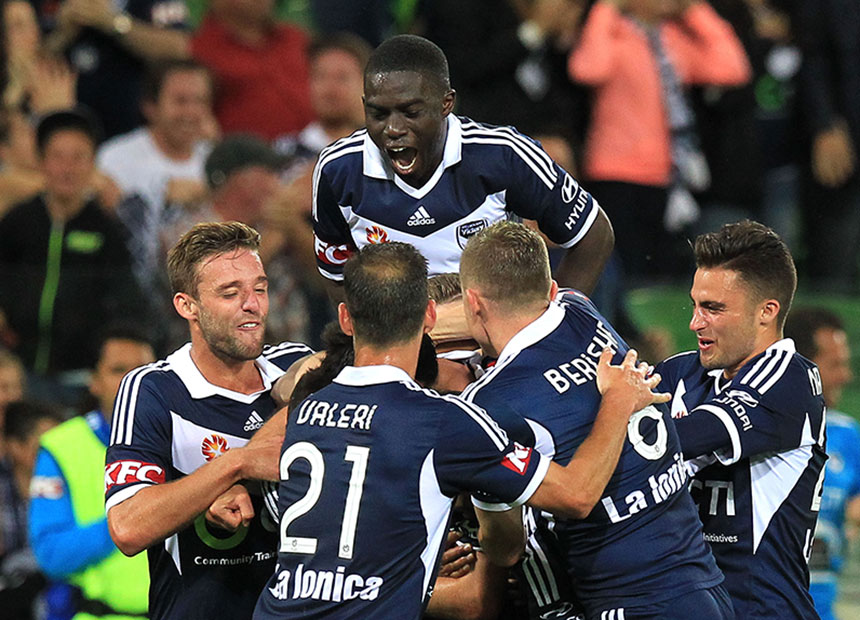 A clinical Melbourne Victory have underlined their A-League premiership credentials with a 3-0 win over the struggling Central Coast Mariners at North Sydney Oval.

Three goals in 11 minutes in the second-half sealed the points but the final scoreline was harsh on the Mariners, who were holding their own against Kevin Muscat’s side for an hour before being undone by three high quality goals.

Besart Berisha, opened the scoring in the 61st minute with Daniel Georgievski then adding the second with a goal of the season contender.

Substitute Connor Pain scored a third to wrap up the win and preserve his side’s unbeaten record and move the Victory up to second spot on the table – three points behind leaders Perth Glory.

Muscat expressed concerns about the pitch before the game, but they proved to be unfounded as both sides played their part in a breathless opening 15 minutes on a slippery surface.

It was the visitors who looked the more threatening early on with the outstanding Fahid Ben Khalfallah pulling the strings in midfield and Thompson and Berisha causing all sorts of problems with their movement in the box.

Berisha and Kosta Barborouses showed signs of intent with efforts that went over the bar, but the Mariners started to come into the game with the returning Matt Simon giving the hosts some presence in attack.

Hungarian midfielder Richard Vernes clipped the top of the net with a decent free-kick and Victory right-back Jason Geria rescued his side with a superb last-ditch tackle to take the ball off the toes of Nick Fitzgerald just inside the box.

The second period started at a far more sedate pace to the first before Berisha showed his striker’s instinct just after the hour mark to beat Reddy with a low drive after being superbly teed up by the evergreen Archie Thompson.

Vernes had a golden opportunity to restore parity almost immediately when he latched onto a Anthony Caceres pass, but his first-time volley flashed just over the crossbar.

But the game was turned on it’s head by left-back Georgievski who dispossessed Nick Montgomery just outside the box then bent a magnificent effort into the top right-hand corner of Reddy’s net.

The strike knocked the stuffing out of Phil Moss’ side and Paine took advantage of some slack marking to give Reddy no chance from close range from a low Barborouses cross.

Caceres went close to grabbing a consolation in the final minute but his 25-metre thunderbolt hit the side-netting.