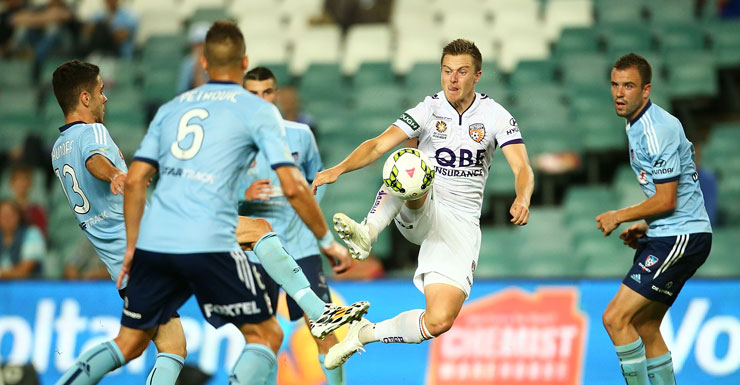 Perth Glory have extended their best start to an A-League season with an outstanding 2-1 win over Sydney FC at Allianz Stadium.

The Glory struck twice in the final eight minutes on Thursday night, having trailed to a controversial Shane Smeltz penalty midway through the second half to inflict a first defeat of Graham Arnold’s reign.

Kenny Lowe’s side also leapfrogged the Sky Blues at the top of the table with Rostyn Griffiths heading home a Nebojsa Marinkovic free-kick and Andy Keogh slotting home from the penalty spot.

Perth have just one grand final appearance to show in 10 A-League seasons that have largely been dogged by mediocrity, but now boast seven wins from their first nine games of this campaign.

But their first-half performance showed why they have been so strong this season as they dominated possession and caused havoc down Sydney’s left flank with Richard Garcia impressing against his old team.

Former Republic of Ireland striker Keogh should have put the visitors in front on the half-hour mark when clean through on goal, but he took too long to take his shot and Matt Jurman recovered well to take the ball off his toes.

Garcia was then put clear by Mitch Nicholls’ smart through-ball but his flashing effort whistled over the upright.

But like they have so often this season, Sydney were vastly improved after halftime with Terry Antonis becoming more involved.

The gifted midfielder created a glorious chance for Bernie Ibini with a deep run and perfectly-weighted pass into the winger’s path, but he fired wide.

Antonis then flashed a half-volley from the edge of the box just outside of Vukovic’s right post as the hosts continued to pres forward.

The home side’s best spell of the game was rewarded just shy of the hour-mark, but it came in highly controversial fashion with referee Alan Milliner ruling Djulbic handballed a Smeltz shot.

Perth were furious at the decision with the ball appearing to strike the defender on the shoulder, with his hands behind his back.

Smeltz finished cooly to break the deadlock and Antonis almost doubled the lead only for Vukovic to claw the ball away with a superb one-handed save from close range.

Perth looked to have run out of ideas against a well-drilled Sydney defence, but they got back on level terms when the impressive Griffiths, unmarked, nodded home Marinkovic’s great ball into the box.

But with six minutes remaining Scott Jamieson’s run into the box was halted by a clumsy challenge from Chris Naumoff and Keogh made no mistake for his sixth goal of the season.

Perth march on with win over Sydney FC