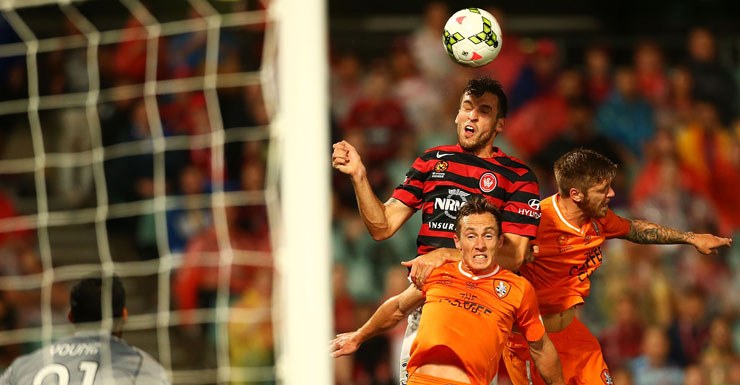 Western Sydney’s A-League woes have continued with Brisbane keeping the Asian champions anchored to the foot of the table with a well-deserved 1-0 win at a rainswept Pirtek Stadium.

It was a first victory for new Roar coach Frans Thijssen since he replaced Mike Mulvey two weeks ago and the former Dutch international midfielder will have seen plenty to be encouraged by from his side.

But for Wanderers coach Tony Popovic, who was crowned AFC coach of the year this week, it represents the first genuine crisis in a career where everything he’s touched has turned to gold.

Four successive home games have only yielded three points and with a trip to high-flying Adelaide looming on Saturday there’s a real chance his side will head to Morocco for the FIFA Club World Cup on Sunday without a win to their name.

The monsoon-like conditions that hit the area late on Wednesday afternoon subsided by kick-off, but it was the Roar who found their feet quickest in the slippery conditions.

Brisbane should have been out of sight at halftime after dominating most of the opening period but only had Henrique’s fifth-minute penalty – which proved to be the only goal of the game – to show for their efforts.

The Brazilian striker, who scored the winning goal in last season’s grand final between these sides, sent Ante Covic the wrong way from the spot after he’d been clumsily brought down by Seyi Adeleke.

Mensur Kurtisi should have doubled the lead when he shot over the bar after working his way into the box and Henrique forced Ante Covic into a flying save on the half-hour mark.

Dutch winger Romeo Castelen had the best chance for the hosts when his shot was blocked on the line by Daniel Bowles.

The second period started in similar fashion with the Roar defence, well-marshalled by skipper Matt Smith, getting men behind the ball to snuff out the Wanderers’ attack and Henrique and substitute Jean Carlos Solozarano looking dangerous on the break.

Popovic left Tomi Juric out of his matchday squad and dropped Nikita Rukavytsya to the bench before throwing on the Socceroos wideman into the fray on the hour mark.

His introduction added some spark to his side’s attack with the premiers forced into some last-ditch defending to deny Castelen and Mark Bridge.

Rukavytsya should have done better when clean through, but his weak shot was easily dealt with by Jamie Young and from the resulting clearance Solozarano was prevented from wrapping up the points when his fierce drive clipped the post.

Roared on by the crowd of 10,252 the Wanderers threw everything at the premiers in the final five minutes and Rukavytsya almost snatched a point, but his cracking effort from the edge of the box cannoned off the bar.