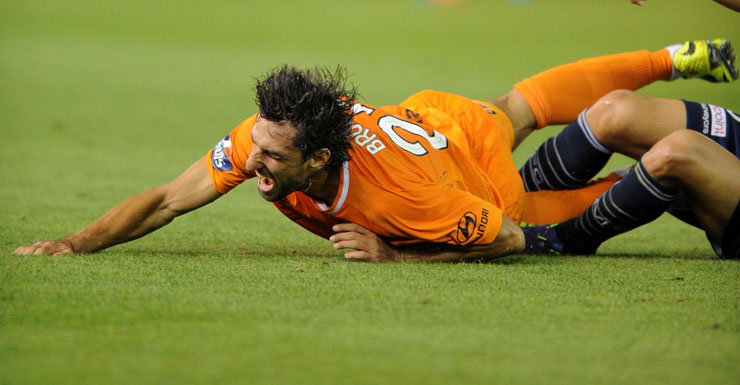 Brisbane Roar’s horror A-League season has hit another low, with marquee man Thomas Broich expected to be sidelined for six weeks due to ankle surgery.

Barely a week after coach Mike Mulvey’s shock sacking six games into their title defence, the Roar are reeling from news that Broich will go under the knife on Wednesday after visiting a specialist.

The German midfielder was injured in the Roar’s 1-1 last round draw with Perth Glory and did not travel with the team ahead of Wednesday night’s away clash with Western Sydney Wanderers.

“With the heavy load of matches we have coming up, it was decided not to risk aggravating the injury any further by Thomas continuing to play,” Brisbane Roar interim coach Frans Thijssen said.

He said immediate surgery was considered best for the two-time Johnny Warren Medallist with the Roar enjoying an A-League break from January 9-31 for the Asian Cup.

Thijssen is yet to announce a replacement for Broich for Wednesday night’s grand final re-match.

He was hopeful Broich would return for the Roar’s first game after the Asian Cup break – a home match against Wellington on February 2.

Broich out for six weeks