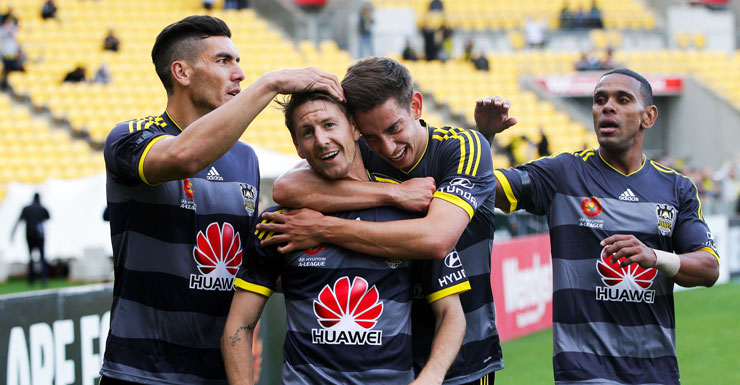 Wellington Phoenix striker Nathan Burns has his own memories of fallen cricketer Phillip Hughes, and paid tribute in his own way at Westpac Stadium on Sunday.

Former Australian opening batsman Hughes died this week after being struck by a bouncer during a Sheffield Shield game in Sydney.

Burns was in outstanding form for the Phoenix in their 5-1 win over Melbourne City on Sunday, slamming home the club’s first-ever hat-trick in 194 A-League matches.

But it was the 26-year-old striker’s memories of his earlier cricket-playing days with Hughes that were on his mind at the post-match press conference.

“I was honoured to play a bit of school cricket with him when I was back in the country, him being a Catholic boy himself,” Burns said.

“We played a few games, he got most of the runs and we just stood at the other end. It’s quite a sad week in sport in Australia.”

Players and match officials joined with a 7140-strong crowd at Westpac stadium in observing a minute’s silence before Sunday’s game, and players wore black armbands in Hughes’s memory.

Sustained applause echoed around the stadium in the game’s 63rd minute, marking Hughes’s score when he was hit trying to hook a bouncer from Sean Abbott while batting for South Australia against New South Wales on Tuesday.

The Phoenix were in outstanding form on Sunday, thumping home four goals in a golden 20-minute spell either side of halftime.

An 85th-minute penalty wrapped up the win.

Coming off back-to-back 2-1 away losses to Adelaide United and Perth Glory, Wellington struggled to contain City for much of the first half.

But in stark contrast to their previous games, they made the most of their chances with late goals to Burns and Roly Bonevacia to take a 2-0 lead into the break.

The onslaught continued after the restart, Burns belting home his second after barely a minute, and Roy Krishna making it four just as 50 minutes ticked over.

City hauled one back after 68 minutes, David Williams converting from the spot after Bonevacia’s trailing leg brought down James Brown.

But with only one win from seven starts – a 3-1 victory over Brisbane Roar three weeks ago – City looked bereft of ideas after making most of the early running, and Wellington’s well-organised defence was never really stretched.

Burns’ spot kick wrapped up his hat-trick and gave him seven goals from eight games this season, putting him two goals clear of Melbourne Victory’s Berisha in second place on the golden boot rankings.

Meanwhile, in Sunday’s other A-League match, the Newcastle Jets and Central Coast Mariners played out a 1-1 draw at Hunter Stadium.

The point takes the Jets off the bottom of the table, but the home side will feel they should have taken all three points after hitting the woodwork twice.

Giant Ecuadorian striker Edson Montano broke the deadlock for the hosts three minutes after the break.

The Mariners responded positively with their best spell of the game and almost equalised immediately through a Glen Trifiro free-kick that came back off the upright.

But that let-off for the Jets was soon forgotten with exciting young Mariners winger Mickey Neill finding Hungarian midfielder Richard Vernes who slotted home his first goal for the club.

Former Mariner Marcos Flores had the best chance to wrap up the points for his side in the 69th minute after a fine run by substitute Andrew Hoole.

But the Argentine playmaker, who stole into the penalty area unmarked, side-footed onto the crossbar when he really should have scored.

Matt Sim almost grabbed the win for the visitors two minutes from time but his fierce strike was pushed around the post by Ben Kennedy in the Jets goal.