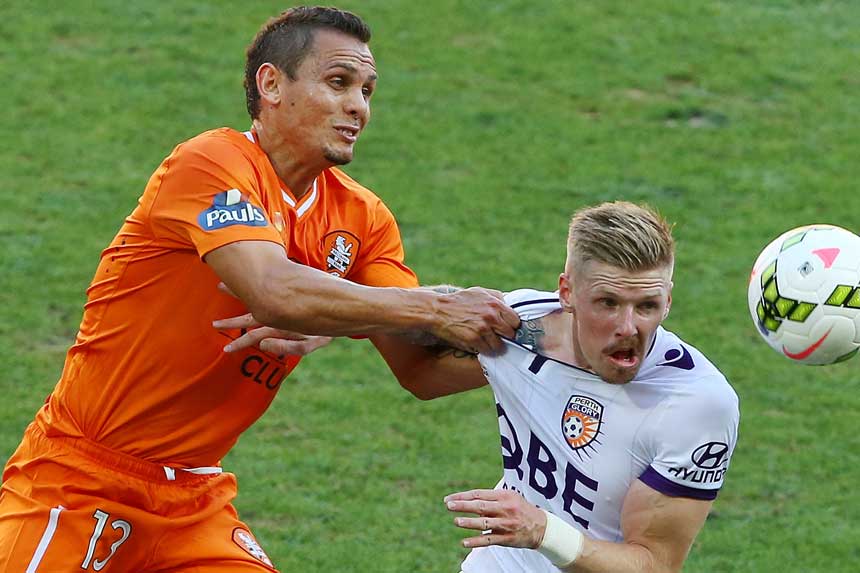 The Brazilian took a through-ball from Corey Brown on his chest and turned Scott Jamieson before coolly slotting past Daniel Vukovic to cancel out Dino Djulbic’s first-half strike for Perth in the 1-1 draw at Suncorp Stadium.

Moments later Henrique had a great chance to give the Roar victory when he just failed to get under control substitute Mensur Kurtisi’s low ball across the six-yard box.

The late drama camouflaged a disappointing performance from the hosts in the first game of the post-Mike Mulvey era, where the problems that have dogged Brisbane in the 2014-15 season remained as they failed to turn possession advantage into goals.

The match started promisingly for Brisbane and Thomas Broich should have put them in front in the second minute when he hit straight at Vukovic from the edge of the box after young left back Brown, in his first game of the season, cleverly pulled the ball back to him.

Fed by Broich on the wing, he slalomed inside beating four men before firing at goal with his effort flicking the bar on way over.

In the 20th minute, Djulbic outmuscled Matt Smith before volleying home Nebojsa Marinkovic’s corner into the roof of the net from eight yards out.

After promising so much in the early stages, Brisbane fell away in the latter half of the first half and even more so after the interval.

Moments after the crowd of 13,043 saluted the late Phillip Hughes as the clock struck 63 minutes, Andy Keogh should have doubled the visitors’ lead but he headed Scott Jamieson’s corner just wide of the Roar goal. It was a miss Kenny Lowe’s side were to rue.

The point extends the Glory’s lead at the top of the ladder to four points, while Brisbane remains third-bottom with four points.