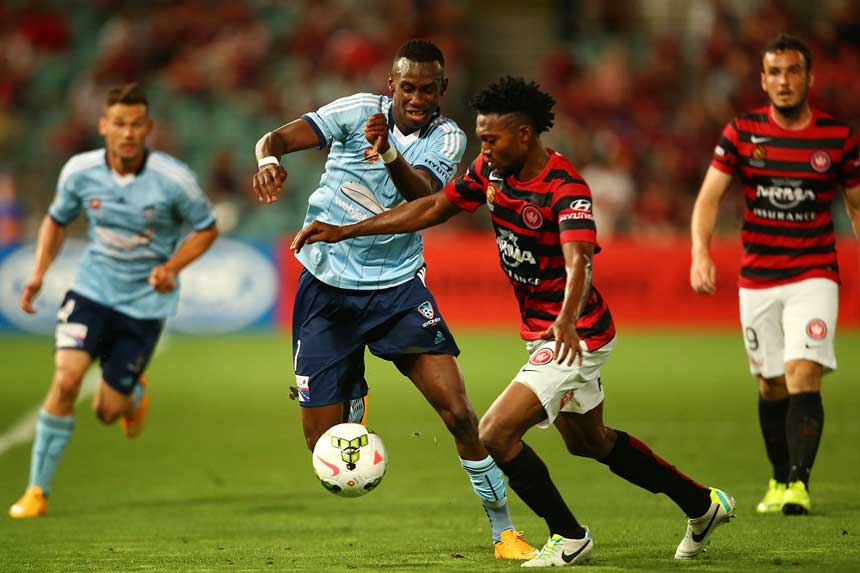 The draw leaves Sydney FC undefeated after eight rounds of action, while the Wanderers remain winless.

Iraq international Abbas was crunched in a heavy challenge from Wanderers enforcer Iacopo La Rocca in the opening six minutes.

Abbas was immediately carried up the tunnel by medical staff and shortly after reports were made that Abbas had suffered a torn ACL.

Abbas was booed off the ground by Wanderers fans, a year after accusing Wanderers striker Brendan Santalab of racism during a heated derby at Allianz Stadium last season.

While the Wanderers looked the better side throughout much of the match on Saturday night, their inability to take their chances hurt them badly.

But it was Bernie Ibini’s strike that hurt most of all, after he combined with former Central Coast Mariners teammate Pedj Bojic to score an early contender for goal of the year for Sydney FC.

Just a minute after the Wanderers’ Nikita Rukavytsya was denied by the post, Ibini brilliantly beat two Western Sydney defenders and Ante Covic to level the scores at 1-1 late in the first half.

Ten minutes earlier, Socceroos striker Tomi Juric opened the scoring for Western Sydney by engaging in a lovely exchange of passing in a crowded box with Mark Bridge.

During first-half injury time, Sydney FC goalkeeper Vedran Janjetovic pulled off a stunning save to deny Bridge, who had been sent through one-on-one after some stunning passing through the midfield.

Late in the game the Wanderers had plenty of chances to win it with Shannon Cole being played in by Rukavytsya only to stumble.

Rukavystya then had his own chance foiled as a poor touch gifted the ball to Janjetovic.

The draw could leave the Wanderers on the bottom of the A-League ladder, with a game in hand, heading into their match on Wednesday night against the struggling Brisbane Roar.