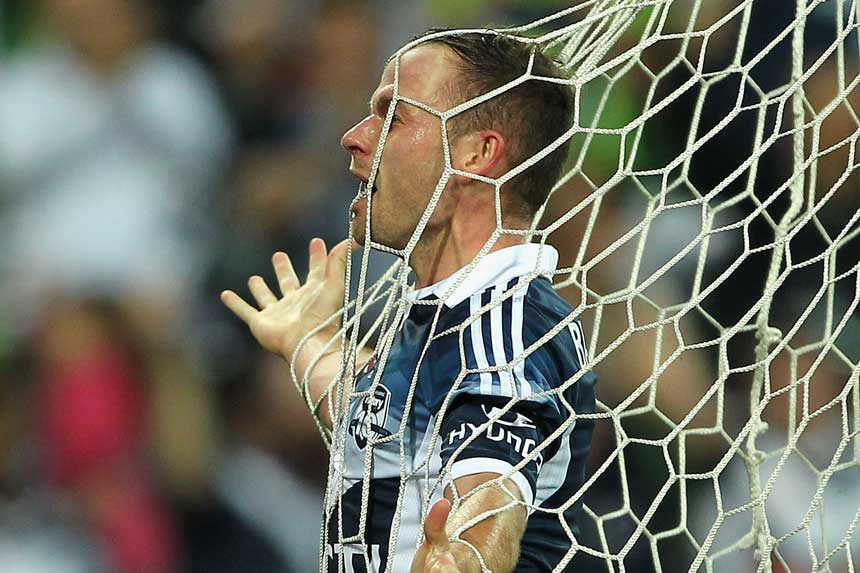 Broxham’s goal and two United own goals was enough for Victory, with Awer Mabil and Marcelo Carrusca netting in reply during a madcap first-half.

The win returns Victory to the top of the A-League.

• 10 of the best Melbourne Victory moments
• Honeymoon over for Ange

This was a night where both sides could have scored five, with Nigel Boogaard at the centre of the action after scoring one own goal and assisting another.

Adelaide had barely touched the ball when Victory began the scoring spree after seven minutes.

Gui Finkler’s delivery into the box found the back of the net when a backtracking Boogaard headed in an own goal under much pressure.

The barnstorming contest had an equaliser on 14 minutes when Mabil scored, but Kevin Muscat’s side returned to the lead with a slapstick moment from Boogard.

Finkler glided into the box and delivered across goal but the hapless defender cleared straight into the face of Sergio Cirio for another own goal after 16 minutes.

A minute later it was time for a Victory player to get on the scoresheet.

The dynamic Fahid Ben Khalfallah found Broxham unmarked at the back post, who headed home.

United thought they’d found a reply on 34 minutes when Goodwin netted directly from a free kick, but the referee found a foul on Adrian Leijer in the box.

Half-time stopped the flow of goals but nor the relentless attacking from both sides.

Mark Milligan went close with a header from the top of the box, while Mabil continued to threaten on the wing.

Josep Gombau made all three substitutions by the 65-minute mark, including Osama Malik off with a leg injury.

Joining Malik in the wars was Finkler, substituted with a groin injury, and substitute Nick Ansell, struck in the face with a cross.

A procession of tricky 50-50 decisions and intense tackles brought tensions to the boil at several points in the second half.

While the match yearned for another goal, Goodwin’s wastefulness from set-pieces and Victory’s prolifigacy in front of goal kept the half-time score unchanged.

In injury time the chances kept coming, with Pablo Sanchez missing at the back post and Bruce Djite slicing wide.