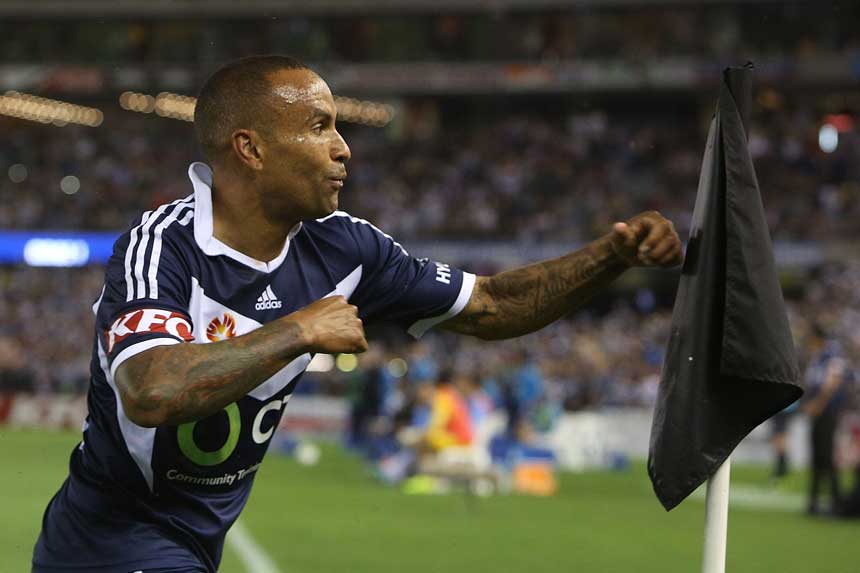 Archie Scores 5 in the Grand Final

With help from assist king Fred, Archie Thompson tore through Adelaide United at Etihad Stadium with five goals in the 2007 A-League Grand Final. Victory fans will long remember marching down Swanston St after the win chanting the electric strikers name.

In the A-League’s inaugural year the rivalry between Sydney ‘Bling’ FC, boasting Dwight Yorke, and Melbourne Victory came to life. In the second meeting ever between the sides, Richard Kitzbichler fired Victory ahead just before half time. The four extra goals after the break then ignited the hatred that lasts to this day.

Robbie Kruse stunner and that celebration

In my humble opinion, the best goal ever scored in the A-League. One of the best pieces of technique and skill ever produced in a Melbourne Victory shirt. In a final, away, and after he had been crudely tackled on the same pitch merely weeks before Robbie Kruse did something special. And that celebration!

The range of passing and shot power this man had made up for what he lacked in fitness and a sometimes-aloof attitude. You could argue which one of his 28 Victory goals was the best until the cows come home but for sheer ‘wow factor’ this bullet is it.

Journeyman Tom Pondeljak drifted a long range strike into Adelaide’s goal in the 2009 Grand Final to give Victory their second title. While not a great game, or a really amazing goal, the title win was a fitting moment for captain Kevin Muscat and coach Ernie Merrick who helped create the A-League’s first tw- time title winners and powerhouse team.

The miracle against Sydney FC version one

Shannon Cole scored for Sydney at the 28-second mark of the game. Brendan Gan made it 2-0 in the fourth minute with both goals rippers from outside the box. It set up another 90 or so minutes of genuine mayhem highlighted by Nick Ward’s laser beam equaliser in the 71st minute. The roar when Ward struck will go down as one of the loudest ever at the Docklands, only neared by the one for Ney Fabiano’s winner soon after.

The North Terrace at AAMI Park

Melbourne Victory fans who say they prefer games at Etihad Stadium over the boutique AAMI Park are in the minority. In fact they may not even exist. When the North Terrace is in full voice, colour and unison at AAMI underlined by the slapstick English style chanting of the South End, there are few better scenes in Australian sport. See below the North Terrace’s response to Archie Thompson’s late winner against Melbourne Heart in 2012.

Plucked from State League side Altona Magic by Ange Postecoglou, Andrew Nabbout became a Melbourne Victory legend in 35 minutes of extraordinary football in only his second game. Words won’t do it justice, so check it out below.

The story goes, when he first started training with the senior squad as a teenager, manic competitor Kevin Muscat used to rough up Broxham in training. Not out of scorn, but out of respect for the talent and potential of Broxham, his captain was hard on him. Similarly so were Victory fans in the club’s leaner years under Ernie Merrick’s late reign and Mehmet Durakovic’s temporary spell. But as soon as Ange Postecoglou came to coach, Broxham’s fortunes changed and he is now integral to the Victory side.

In the middle of A-League season nine Melbourne Victory announced they’d signed arguably the best player to ever feature in the competition. After a few lean years and a couple of seasons using Postecoglou’s ‘False 9’ system with no central striker, Berisha’s arrival brought unseen levels of optimism to AAMI Park. If his start to Victory life is anything to by, the combustible yet freakishly skilled Albanian will be a legend of the club.

10 of the best Melbourne Victory moments