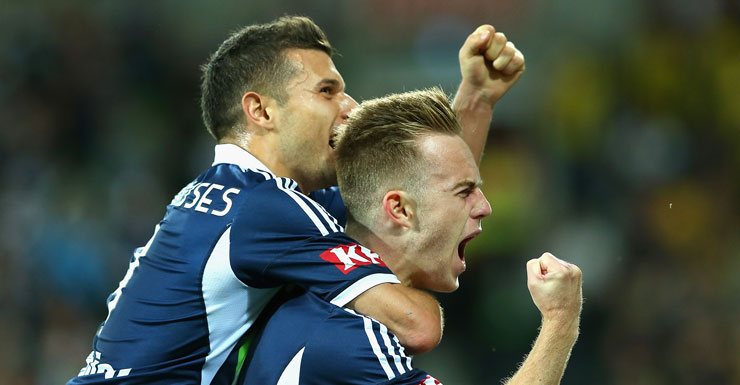 Melbourne Victory marked their return to AAMI Park with a comprehensive 2-0 win over Wellington Phoenix in-front of 23,827 fans on Monday night.

Goals in each half, one from Gui Finkler in the first and Connor Pain in the second, sealed the win for Victory which sends them to the top of the A-League ladder after four rounds.

Victory were forced in to a number of changes following their midweek FFA Cup exit against Perth Glory, with Mark Milligan and Leigh Broxham pushed in to defence to cover for the injured Matthieu Delpierre and the suspended Adrian Leijer.

Archie Thompson was moved in to the striker role in place of injured Besart Berisha, with Fahid Ben Khalfallah given his first A-League start.

Daniel Georgievski was also suspended, with youngster Dylan Murnane given the nod at left-back.

Phoenix defender Louis Fenton found himself in for a long night with Ben Khalfallah looking to cause havoc down the left for Victory early on.

Thompson had a shot blocked inside three minutes after being set up by Khalfallah before Kosta Barbarouses sprayed a shot wide after being allowed to run into the box from the right.

Carl Valeri continued the barrage on the Phoenix goal with a shot from outside the box after being set-up by Finkler, but he could not get his body right with the shot sailing over the bar.

Khalfallah continued to give Fenton nightmares and the Tunisian won the free-kick that was expertly dispatched by Finkler for the opening goal on 24 minutes.

The Phoenix came close to an equaliser on the stroke of half-time when Rolieny Bonevacia played in Nathan Burns however the forward was denied by Victory goalkeeper Nathan Coe.

Wellington coach Ernie Merrick shuffled things up at half-time to try to get back in the game with the introduction of striker Jeremy Brockie in place of midfielder Alex Rodriguez.

It proved fruitful with the Phoenix enjoying a bright start to the second 45 minutes.

Victory boss Kevin Muscat made some changes of his own 20 minutes in to the half, bringing on Pain in place of Khalfallah, while Valeri was forced off through injury and replaced by Jesse Makarounas.

The move paid off practically immediately with Thompson playing through Pain and with his first touch of the ball the 20-year-old slotted it in to the back of the net to make it 2-0 and seal the three points for the home side.