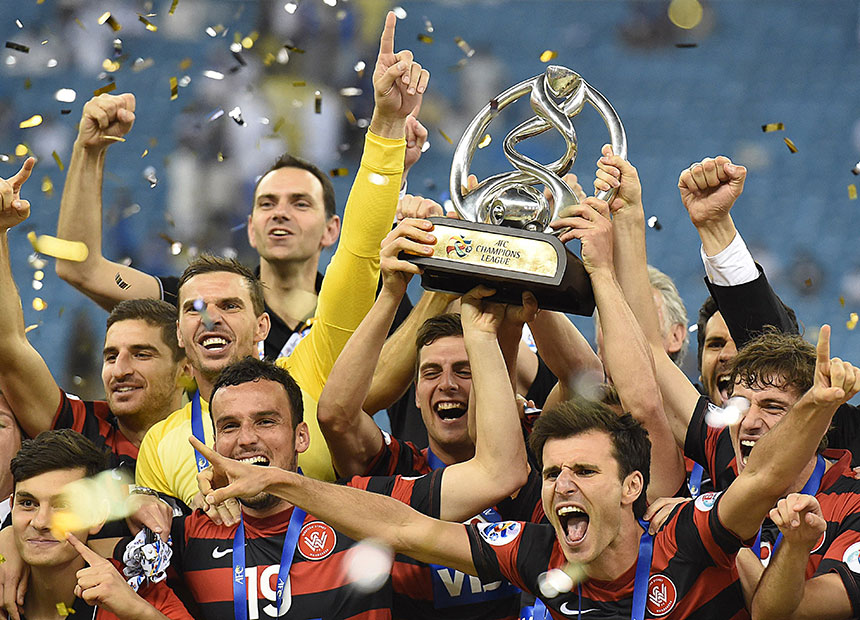 Western Sydney Wanderers planted their red and black flag on the summit of Asian football in the early hours of Sunday morning by winning the Asian Champions League.

It is the single greatest achievement in the history of Australian football and the most important moment in Australian sport for 2014.

• In Pictures: Wanderers win the unwinnable
• Are these the most dedicated 14 fans in Aussie sport?
• Cocky Al-Hilal coach ‘disrespectful’ to Wanderers

With a scoreless draw against Saudi Arabia’s Al Hilal in Riyadh early on Sunday, the Wanderers were crowned kings of Asian club football on the back of Tommy Juric’s precious goal in their 1-0 win in the first leg of the final at Paramatta last weekend.

In the space of three short years, the Wanderers have gone from a club that was a dream waiting to be realised for the people of Western Sydney to becoming a regional football powerhouse.

And they’ve had to do it the hard way.

The battling performance in Riyadh was trademark Wanderers.

Away from home, in a stadium salivating at the prospect of their demise, Tony Popovic’s men were calm, organised, determined, focused and resilient.

Their reward was the sweetest scoreless draw they will ever play.

Up until now, the Asian Champions League has seemed a bridge too far for Australia’s A-League teams.

Adelaide United had made the greatest inroads in the competition, contesting the final against Japan’s Gamba Osaka in 2008.

Otherwise, it’s been all too hard.

Big Asian clubs like Al Hilal are cashed up and resource rich.

The Western Sydney Wanderers still train out of a modest sports complex in Blacktown that most private schools in Australia would blanch at.

Consider this. Popovic’s squad that qualified the Western Sydney Wanderers for the Champions League said goodbye to eight players before the start of the knock out phase of the competition.

That sort of player churn would ruin even the best laid plans by the finest clubs in the world.

Added to squad restrictions, a salary cap and a season out of sync with the rest of Asia, Australian teams have found the competition to be more of a distraction than an opportunity.

With this victory, the Western Sydney Wanderers have completed Australian football’s integration into Asia.

Coupled with hosting the Asian Cup in January, Australian football has truly found its home in the region.

The win also underlines one of the game’s greatest assets – its ability to reach beyond these shores in a meaningful and substantial manner.

While rugby league trundles on with an anaemic Four Nations tournament and the AFL continues to pursue its farcical international rules series with a game no one plays and fewer people care about, Australian football is taking to the world stage.

Closer to home, the battle of the codes in Sydney’s western suburbs may be over.

This win ensures it’s Wanderers territory – at least for now.

And having won a berth at the Club World Championship in Morocco in December, the world awaits.