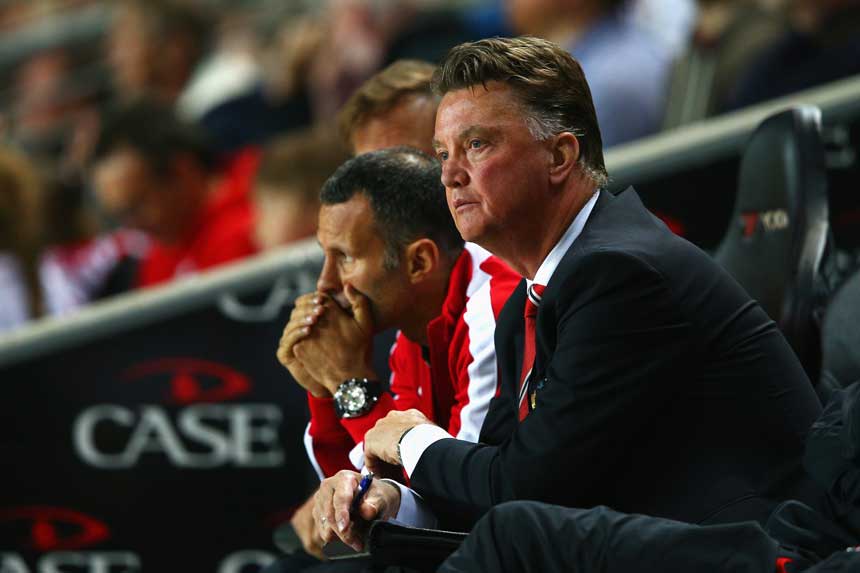 Manchester United sank to new depths when they crashed out of the League Cup in the second round following a 4-0 defeat at third-division Milton Keynes Dons.

United had announced the signing of Angel di Maria from Real Madrid in a British-record STG59.7 million ($A109 million) deal shortly before kick-off on Tuesday, but they were brought down to earth with a painful bump as a second-string team fell apart at Stadium MK.

Will Grigg scored either side of half-time for the League One side before substitute Benik Afobe added a brace of his own to leave a shell-shocked Louis van Gaal still searching for his first competitive win as United manager.

“It’s a matter of making errors at the wrong moment. When you see the goals against us, we made big errors in the build-up situations that you cannot make,” van Gaal told Sky Sports.

“You don’t have to forget that we have nine injuries and that we had a very young team. I have seen them trying to do their utmost best, so you cannot expect more of the players.”

Asked if he had a message for United’s fans, van Gaal said: “They have to believe in our philosophy. We are building up a team and you cannot make it in one month, not in one year.

“Of course it’s very disappointing, but I hope they shall maintain their confidence in the club and our philosophy because that philosophy takes time.”

United’s defeat mirrored what had happened on their last appearance in the second round in 1995, when they fell to third-tier York City, and means a potential path to silverware has been shut off before the end of August.

“I’m a little bit in shock, to be walking around and seeing the scoreline,” said MK Dons manager Karl Robinson.

“It’s ridiculous. It’s something that dreams are made of for these players.”

Van Gaal made 10 changes to his starting XI, with goalkeeper David de Gea the only player to hold onto his place from Sunday’s 1-1 draw at Sunderland in the Premier League.

The visitors received an early setback when Shinji Kagawa had to go off after a clash of heads and in the 25th minute they gifted their hosts the lead.

Jonny Evans, United’s captain for the day, passed the ball straight to Ben Reeves inside his own area and the Dons number 10 squared to Grigg for a simple tap-in.

The home side were aggrieved not to have been awarded a penalty early in the second half when a shot from Dean Bowditch struck Evans on the arm, but in the 63rd minute they added a second goal.

After United again conceded possession cheaply, Grigg sprayed a pass wide to Reeves, who crossed for Grigg to beat De Gea with an outrageous chested finish from 10 yards.

There was more misery to come for United, whose seventh-place finish last season was their worst since 1990.

With 20 minutes remaining, Reeves displayed his disdain for the visiting defence with a showy no-look through ball for on-loan Arsenal striker Afobe, who held his nerve to sweep the ball past De Gea.