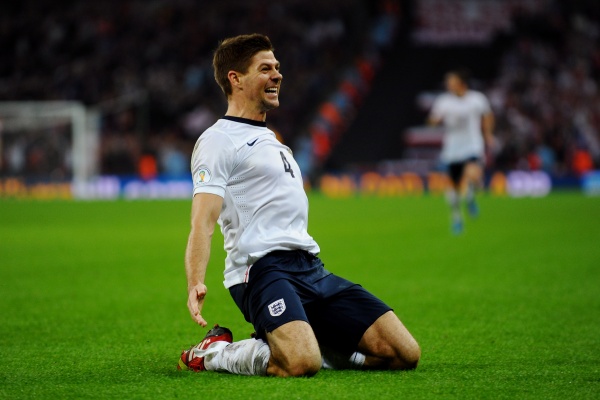 England won 2-0 at home to Poland on Wednesday (AEDT) to reach their fifth successive World Cup finals, with goals from Wayne Rooney and Steven Gerrard sealing their passage to Brazil.

Rooney had opened the scoring just before half-time, but Poland had several chances to shock the hosts, who could not afford a draw.

Captain Gerrard, who made sure of the win when he scored his country’s second goal in the 88th minute, conceded England must improve to beat the world’s best.

“The big lesson is to play better in the second half. We must keep the ball better when it gets tough,” Gerrard said.

“But at times in the last two games we were fantastic. Tonight, we started really well and we are getting better defensively.

“We know there is a great togetherness in the squad, and that is all that matters. We performed under tremendous pressure.”

With the road to Rio finally reaching a successful conclusion after some disappointing displays earlier in the qualifying campaign, Rooney is adamant England can go to the World Cup confident of making an impact.

“We have some fantastic young players in our team, with some great experience. It is a good blend, it is good times for England,” he said.

Bosnia-Herzegovina, meanwhile, secured their qualification for the soccer’s biggest stage with a 1-0 win over Lithuania.

They will be joined by holders Spain, who made no mistake in beating Georgia 2-0 at home in Albacete.

England’s manager from their failed 2010 finals campaign Fabio Capello will also be in Brazil after Russia got the point they needed with a 1-1 away draw at Azerbaijan.

Bosnia – who had lost to Portugal in play-offs for the 2010 World Cup and Euro 2012 – progressed at the expense of Greece, who go into the play-offs, while Portugal finished runners-up to Russia and will also contest a winner-takes-all play-off.

Vedad Ibisevic was Bosnia’s hero, scoring what was the most important of his 20 international goals in the 68th minute.

His side-footed effort came just two minutes after he had seen another shot brilliantly saved by Giederius Arlauskas, who had denied Bosnia throughout the match in a stunning performance.

In South American qualifying, two-time champions Uruguay served up a thrilling 3-2 win over Argentina in Montevideo, but must beat Jordan in next month’s intercontinental play-off if it is to reach the finals.

Uruguay was beaten to the punch by Chile and Ecuador, who claimed the final automatic South American qualifying berths behind regional group winners Argentina and second-placed Colombia.

Chile beat Ecuador 2-1 in Santiago to ensure third place in the regional table with 28 points from its 16 matches, two behind Colombia and four shy of two-time world champions Argentina.

Despite its loss Ecuador just prised the final automatic slot away from the Uruguayans on goal difference after both finished with a points tally of 25.

Uruguay, ranked seventh in the world, had lost its previous qualifier in Ecuador, compromising its hopes. But it did at least sign off with a win and should prove too strong for Asian minnows Jordan.