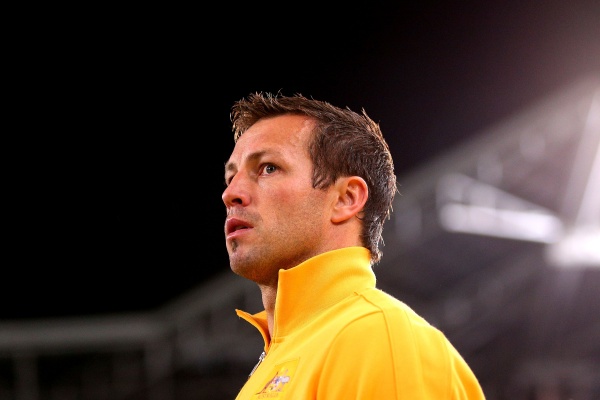 Once the poster boy for Australian football, Lucas Neill is now being painted as the villain.

Former Socceroo Robbie Slater on Tuesday said the 35-year-old defender should immediately be stood down as Australian captain and retire, claiming he has torn apart an already broken squad with his response to coach Holger Osieck’s sacking.

Slater slammed as “disgraceful” Neill’s attempt to defend his position within the squad in his first media appearance since Osieck was axed following the 6-0 loss to France.

“Lucas is in survival mode. He’s got that siege mentality and you can see that in the interview – it’s very defensive.

“There is a case to be stood down as Australian captain straight away by (Football Federation Australia CEO) David Gallop.

“It shows the need of how quick we need to get somebody in place because he shouldn’t have been allowed to do that interview.”

Neill dismissed a call by former goalkeeper Mark Bosnich to quit the team, and instead questioned the passion of the next generation of Socceroos.

“Football is a game of opinions. He’s entitled to his, (but) I expect better from people who’ve played the game and certainly from people that call themselves my friend,” he said.

“My question to the younger guys who want to play for Australia is: do you dream of playing for Australia and if you do, show me the hunger and the desire.

“I think that’s where we are lacking now – our attitude towards our national team.”

Slater, who played 44 matches for Australia during the 1980s and 1990s, said the FFA needed to appoint a local coach as soon as possible to bring the Socceroos back together as a team.

“That squad is now torn apart. If it wasn’t already before because of the results, it is certainly now because of what the captain has said,” the 48-year-old added.

“I cannot believe how many times I heard the word `I’ in that interview.

“And for him to have a go at the younger players, our captain, that is exactly the opposite of what a captain should be doing. He should be pulling those players together.

“He has now clearly driven a wedge between the older generation and the younger generation.”

FFA chairman Frank Lowy, who on Tuesday declared it was a three horse race between A-League mentors Ange Postecoglou, Graham Arnold and Tony Popovic for the Socceroos coaching role, was one of Neill’s few defenders.

“He has led the Socceroos with distinction for all the time he’s been there,” Lowy said.

“Yes, you could say that (it’s strange for a captain to criticise his young teammates).

“I’m not going to say what he meant or didn’t mean, the words speak for themselves.

“But we need to be mindful that these are turbulent times and things are maybe said in the heat of the moment.

“Who knows, maybe he wanted to get the young players going. Let’s give him some respect for what he has done.”