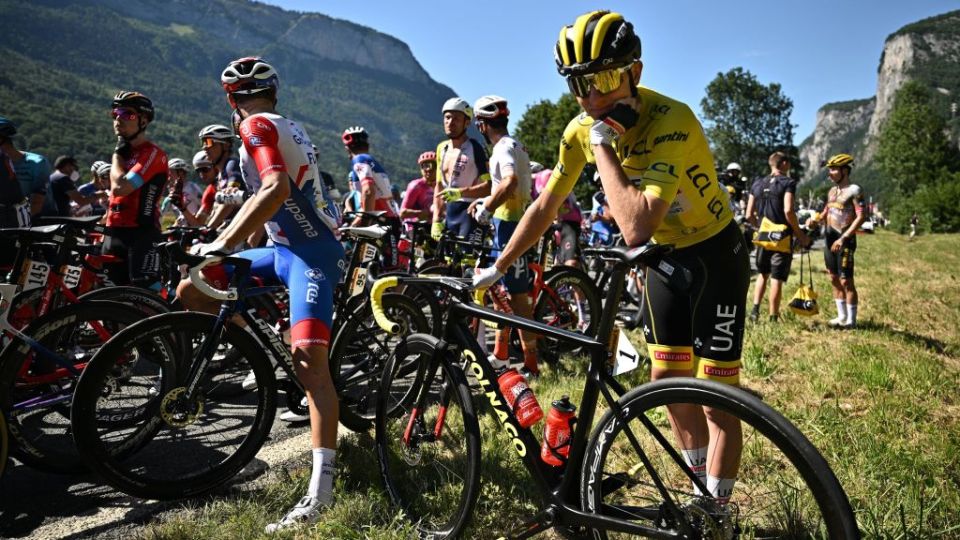 Tour de France riders were held up by protesters for more than 10 minutes. Photo: Getty

Denmark’s Magnus Cort Nielsen has won the 10th stage of the Tour de France, beating Australia’s Nick Schultz in a photo finish, after an interruption by climate activists on a 148.5 kilometre Alpine trek from Morzine.

The race was stopped for about 10 minutes on Tuesday after half a dozen climate activists tried to block the riders, 36 kilometres from the finish.

They were dragged off the road by police and a senior race organiser before the race resumed.

Cort Nielsen prevailed in a nailbiting sprint finish from the day’s breakaway to claim his second career stage win on the Tour after 2018.

Slovenia’s twice defending champion Tadej Pogacar, who has lost two members of his team after they left the race following positive COVID-19 tests since the start in Denmark, retained the overall leader’s yellow jersey.

Sanchez made his move six kilometres from the line but was caught by Matteo Jorgenson, Schultz and Dylan van Baarle.

As the four played cat and mouse in the final straight, Cort Nielsen surged from the back and outsprinted Schultz for a photo-finish victory.

Germany’s Kaemna, who was in the leading group all day, came close to snatching the overall lead and now sits in second place, 11 seconds behind Pogacar, after the bunch crossed the line eight minutes and 25 seconds off the pace.

Wednesday’s 11th stage is a brutal 151.7-kilometre mountain trek from Albertville to the Col du Granon.