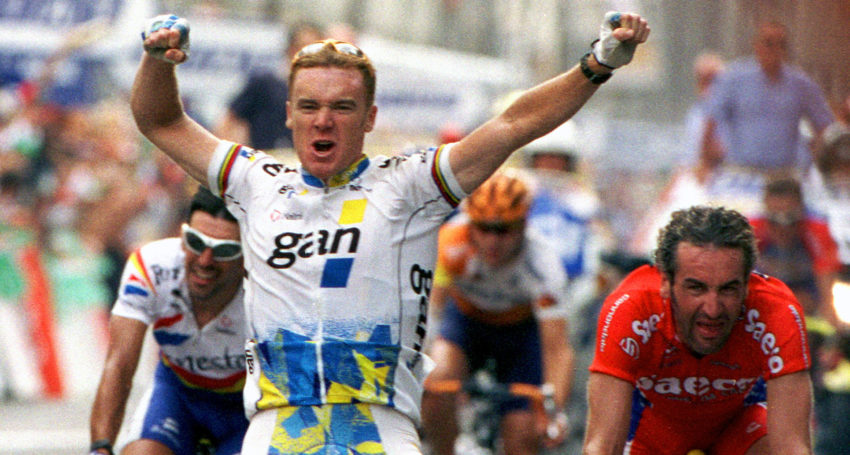 Stuart O'Grady wins the 14th stage of the Tour de France in 1998. He says he dosed himself with EPO before the race. Photo: AP

He didn’t suffer any lasting penalty or punishment of any significance, apart from enduring embarrassment.

The Stuart O’Grady Bikeway in Adelaide’s north keeps his name.

This week, his smooth post-confession professional life reached another pinnacle – anointed as the next race director of the Tour Down Under.

You might imagine that the director of Australia’s premier cycling race should have an impeccable record.

The state government, Events SA, much of the local media and the cycling community apparently have a different view.

Back in 2013, O’Grady shocked the racing world by revealing he had taken the blood-boosting agent EPO in the lead-up to the 1998 Tour de France.

He insisted it was a one-off and that he had made the decision alone – driving over the French border to source the agent from a pharmacy and self-administering it.

It’s a story that has been widely accepted.

O’Grady, an Olympic gold medallist and considered one of Australia’s greatest cyclists, is liked and respected in South Australia, so much so that the Liberal government – who made much of serial drug cheat Lance Armstrong’s embarrassing connection to the Tour Down Under – was happy to take a reputational risk on making him the face of the event.

I suppose they presumed it wasn’t much of a risk at all, which says something about the bubble in which we live.

With few exceptions, the reaction has been uncritical in the cycling media, political circles and the community.

Benign. Slightly defensive. That is astonishing.

Important opportunity for a cycling ethics and integrity discussion. Alas, cycling media dare not speak its name. Australian cycling, we could do better. The silence is deafening. pic.twitter.com/aU5oFZ8sQY

Even on the day he made his confession, his reputation was being re-polished by sympathetic cycling journalists. O’Grady, they reasoned bizarrely, was the real victim here.

His every venture since then – most of which involve the cycling industry – has been supported and well publicised by the local media and the community.

After being booted from the Australian Olympic Committee’s athletes’ commission he has been let back into the fold. He’s now the president of the SA chapter of the AOC.

He has kept his medals, his accolades, his connection with the sport.

He is the Australian director of Revolve24 – a cycling event based at The Bend.

Other figures in sport who have fallen from grace have not been treated so kindly. Think of the reputations and careers utterly shredded by the far more ambiguous Essendon peptide scandal.

That wasn’t necessarily a good thing: Kindness and forgiveness are important qualities even in the rough-and-tumble world of professional sport.

However, integrity should be given a high value, particularly when government funds and livelihoods are at stake.

Think also of other Australian athletes – Raelene Boyle comes to mind – who maintained their integrity despite racing against hordes of Soviet bloc drugged-up cheats.

For O’Grady though, the dirtiness of his sport in 1998 has been put forward as some sort of mitigating factor, if not an excuse.

So it seems more than a bit weird that the South Australian community has barely winced at O’Grady’s elevation in charge of one of our most important events.

It is important to remember the circumstances of O’Grady’s confession – and the 15 years of denials that came before.

His admission came just as a French Senate investigation was about to reveal its retesting of samples taken from riders in the 1998 Tour – a process that raised doubts about whether O’Grady raced clean in that race.

If the French inquiry had never happened, would O’Grady still be keeping his secret?

In the years before, he told South Australian sports reporters – and many others – he had never been involved in drugs.

Just months before his confession, he told his biographer – The Advertiser’s Reece Homfray – he was shocked by Armstrong’s drug confession.

“Ever since I’ve been with (coach) Charlie Walsh through the Institute of Sport, it (doping) and all that was just never an option. Cycling for a lot of people is just a hobby or they’re fans, but this is my life.

“I consider myself a pretty good bike rider and I’ve been happy with what I’ve been able to achieve with my natural ability.”

That wasn’t true. Which Homfray found out the following year when he took O’Grady’s belated confession.

Also in 2012, he told another local reporter he could no longer stomach the innuendo surrounding cycling.

“It’s frustrating (doping) – it has run its course, I think,” O’Grady said.

“I think it’s time for everyone next year to start talking about what’s going to happen in racing … back to basics.

“Otherwise this story is going to keep rumbling on for years and the negativity is not good for anybody.”

Unlike the callow youth he says he was when he took the EPO, by this stage O’Grady was a seasoned and celebrated veteran – and he deliberately misled the public.

O’Grady, today, emphasises he made a terrible error.

This week he said he made a mistake, a “bad judgment”, but that he was very young and “for the next 16 years I led by example and there’s a reason why my career went for 19 years”.

That claim needs an asterisk: *a good example apart from the cover-up that ended in the last minute before I was likely to be found out.

Should O’Grady be punished forever because of his mistake? Of course not.

But the cycling world is still a long way from rehabilitating its ragged reputation.

As bitter a pill it is for cycling fans, insiders, the friendly cycling media and O’Grady, it is surely inappropriate for a taxpayer-backed, leading race to be overseen by someone involved – even as a one-off, even peripherally compared to others – in the sport’s most shameful chapter.

There are plenty of other people who could lead the Tour Down Under with distinction.

And there are plenty of other useful things for O’Grady to do for cycling and the South Australian community using his skills, talents and experiences.

By all reports he is a good bloke: I’m not convinced he’s the bloke who should be running this event.

David Washington is the editor of InDaily

Stuart O’Grady and the TDU: An astonishing lack of scrutiny