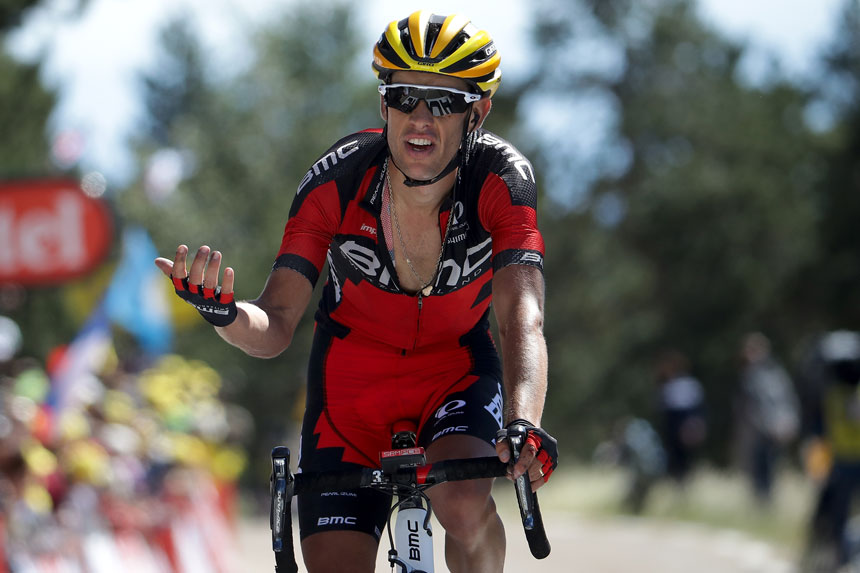 A seething Richie Porte blasted fans for their role in a crash late on stage 12 of the Tour de France that saw the cycling world again pondering the fractious relationship between riders and roadside supporters.

Porte, race leader Chris Froome and Bauke Mollema were hit on Friday morning (AEST) after a motorbike carrying a camera stopped suddenly in front of them due to fans who had covered the road.

While Mollema picked himself up and rode on, Aussie Porte needed a wheel change, while Froome, whose bike was destroyed, ran up Mont Ventoux while his team gave him a service bike and, eventually, a spare.

It was a farcical end to what was meant to be a marquee stage of the race, finishing on the mountain on France’s national Bastille Day.

“The crowd was all over the road and the motorbike just stopped right in front of us,” Porte said.

“We had nowhere to go but straight over the top of the motorbike. It was just a mess.

“Things have got to change and I can’t believe there weren’t barriers there.

“We love the fans and 99 per cent of them are brilliant but why do some of them need to take their selfies and run along beside us? There’s passion and there’s stupidity and it’s not such a fine line between them.”

Froome had the yellow jersey – worn by the race’s leader – taken away from him briefly after the stage, but it was eventually reinstated after footage of the crash was reviewed.

Brit Adam Yates remains 47 seconds behind him after the trio caught in the crash did not lose time for their involvement.

The Tour de France promised to launch a full investigation and race director, Christian Prudhomme, said the normal barriers to keep fans off the road at the end of a stage were not used due to wind.

“We took an exceptional decision because of this exceptional [wind] situation, an incident that might have never happened before in 100 years…there will be an investigation,” he said.

Mollema was unhappy with the decision from organisers, given he made ground on Froome after the incident.

A series of recent incidents

Fans clashing with riders is not new – five-time Tour winner Eddy Merckx was infamously punched in the kidneys in 1975 in a major blow to his chance of winning the race.

But the rate of those clashes has stepped up significantly in recent years.

Earlier in this year’s race, Froome “lashed out” at a spectator who was running alongside him.

The fan, brandishing a Colombian flag in support of Froome’s rival, Nairo Quintana, was annoying the Brit, who said it was “getting dangerous”.

After the incident, he said: “It’s fantastic having so many fans out on the roads but please don’t try running with the riders. It gets really dangerous for guys riding behind.”

Froome was targeted by fans during the 2015 race and had urine thrown on him.

‘Something tragic’ could happen

President of the International Cycling Union, (UCI), Brian Cookson, is worried about how often fans are involved in incidents with riders after getting themselves too close.

“I don’t want to overstate it but ultimately, we have a unique sport,” he said in the Sunday Telegraph last week.

“It is a privilege to be able to get up close to the race and to the event.

“But people have a responsibility to respect that as well. I saw things last year during the Tour that I think went too far.

“And it wouldn’t take too much of a step for something tragic to happen.

“The beauty of our sport is its accessibility, we need to be careful we don’t lose that.”

Why cyclists are furious with Tour de France crowds