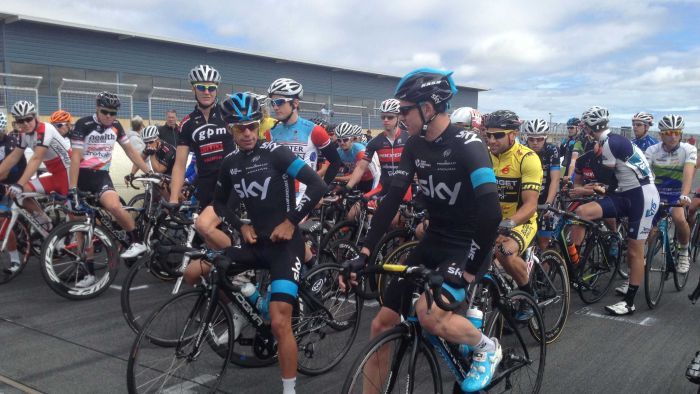 Tour de France team-mates and friends Froome and Porte are in Tasmania to kick off their 2015 campaigns.

• No drugs on Le Tour but cycling still on parole

Froome, who won the 2013 Tour de France, and Porte are competing in the Stan Siejka Launceston Cycling Classic.

But Shannon Johnson from Melbourne beat back Porte and Froome to win the men’s Kermesse today for the third time in a row.

The Kermese is a preview for the classic around the Launceston CBD tomorrow, with about 100 of Australia’s best cyclists expected to attract up to 20,000 spectators.

“I shouldn’t admit it but I was a little star struck this morning when Chris Froome walked out of the hotel,” she said.

“I was like ‘don’t look, don’t look, there’s Chris Froome’. It’s really cool, he’s obviously brought a lot of publicity to the event and that’s fantastic.”