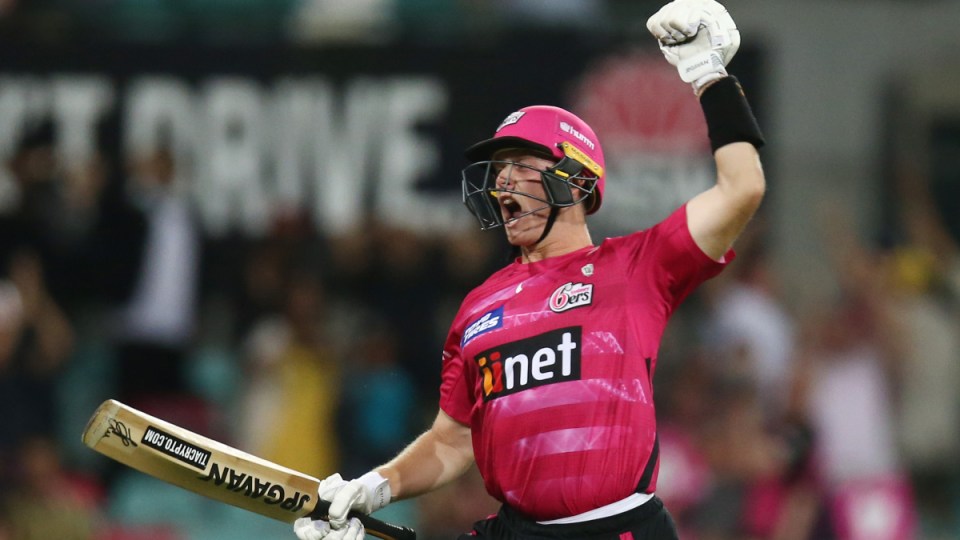 Young gun Hayden Kerr has lifted a depleted Sydney Sixers into the BBL final, riding his luck in a career-best knock of 98 not out to secure a dramatic four-wicket win over Adelaide Strikers.

And the men in magenta may ask the question about Steve Smith yet again after Steve O’Keefe (calf) and Jordan Silk (hamstring) both suffered injuries in the field at the SCG on Wednesday night.

Sixers captain Moises Henriques, who scored 13 in a remarkable chase of 168 that Kerr finished in scarcely-believable fashion, also appeared bothered by a soft-tissue injury on night of incredible theatre.

Jonathan Wells’ unbeaten 62 rallied Adelaide from 3-21 to 4-167 in the Challenger final.

Kerr underlined the hosts’ depth in response, carrying his bat as they reached 6-170.

Harry Conway, who was the final-over hero of the Strikers’ thrilling victory over Sydney Thunder on Sunday night, was asked to defend 12 runs in Wednesday night’s final over.

Conway started with the wicket of a well-set Sean Abbott for 41 but ended with Kerr’s 12th boundary.

There was no shortage of drama in between.

A hobbled Silk walked to the middle, scored a single, watched Kerr wallop a six then retired hurt because the Sixers wanted a fully-fit body at the non-striker’s end for the final ball.

The move did not go down well with Adelaide captain Peter Siddle, while Adam Gilchrist opined on Fox Sports that “it’s probably not in the spirit of the game”.

Kerr benefited from two chances, having been dropped in the deep by Matthew Renshaw on 16 after Test keeper Alex Carey missed a stumping off the first ball of the innings.

The Sixers needed 58 runs from the final five overs but Kerr and Sean Abbott starred in the pressure-laden finish.

Kerr has enjoyed a coming-of-age summer, earning selection in the league’s team of the tournament voted on by coaches, but not even he could have foretold a stunning series of events.

The 25-year-old was promoted to open for the Sixers after their fresh bid for former skipper Smith to play was rejected despite Josh Philippe being an enforced omission because of COVID-19.

Daniel Hughes, another candidate to open if not for his ankle injury, failed a pre-match fitness test.

Kerr, having previously tallied 77 runs at 11 from 11 BBL innings, proceeded to bust the contest open with a series of sensible strokes and powerful blows.

Veteran spinner O’Keefe tweaked his right calf after logging tidy figures of 1-21 from four overs, meaning this knock-out match could be his swansong.

Silk is also in extreme doubt for the high-stakes match in Melbourne, which will mark the fifth time that Perth and the Sixers have squared off in the final game of the season.

Cricket Australia (CA) could potentially expand their list of replacement players, opening the door for a Smith cameo.

The superstar would then need to make himself available for both teams, in the unlikely event Perth needed to draft him into their side.