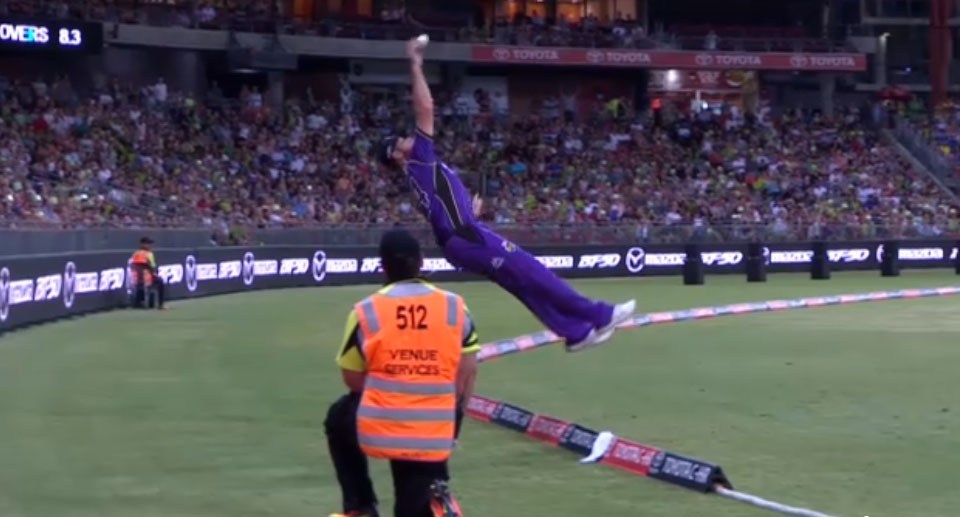 Dan Christian gets airborne to knock the ball back into the field of play. Photo: Channel Ten

On any other day, Dan Christian’s incredible fielding feat would have provided the highlight of the Hobart Hurricanes’ nine-run victory over the Sydney Thunder in the Big Bash league on Monday night.

But on an evening where Hurricane D’Arcy Short smashed 97 from 63 balls and Thunder batsman Jos Buttler belted 81 from 43 in a thrilling run chase, Christian’s athleticism provided one of several jaw-dropping moments.

The all-rounder showed why he is one of the league’s most exciting players when he leaped backwards over the boundary rope to pluck the ball out of the air and flick it back into the field of play to prevent the six.

Short fell agonisingly close to a century, but his innings was enough to lift the Hobart Hurricanes off the bottom of the BBL ladder as the previously winless Hurricanes posted 3-189 at Spotless Stadium in Sydney on Monday.

The Thunder were on track a few times in their run-chase, with Englishman Jos Buttler slamming a classy 81 off 43 balls.

However, the home side collapsed after Shane Watson (36) was dismissed in the 15th over with the score at 2-125.

The Thunder lost 6-42 after the skipper was caught at long-on.

When Buttler was run out by keeper Matthew Wade on the first ball of the last over, it signalled the end of the Thunder’s run chase and they finished at 8-180.

Buttler’s innings was highlighted by a daring ramp shot which cleared the fine leg boundary off Tymal Mills.

He makes it look so easy!

He was also given a second life when dropped by Jofra Archer on 40.

Kurtis Patterson (36 off 26) helped get the Thunder off to a flyer until he was run out by Short at the non-striker’s end.

When Buttler hit it back down the pitch, Short managed to get a finger to it before it rebounded onto the stumps, catching Patterson out of his crease.

Watson cemented his spot as the competition’s highest run scorer with a belligerent innings.

It was a sharp turnaround for the Hurricanes after they were beaten by 57 runs by the Thunder in Launceston just two days earlier.

Short’s innings came to an end on the second last ball as he tried to slog Watson to the boundary to bring up triple figures, but was caught at deep mid-wicket by Chris Green.

Short smashed four sixes and nine fours as he and Ben McDermott (49 off 25) put the Hurricanes on track for victory.

In Perth, the Scorchers chased down the Sydney Sixers 4-167, smashing 170 for the loss of four wickets and with five balls to spare.

Man of the Match Michael Klinger’s 84 off 61 was the defining innings in the run chase.

What a leap! Spectacular save overshadows huge hitting in Big Bash