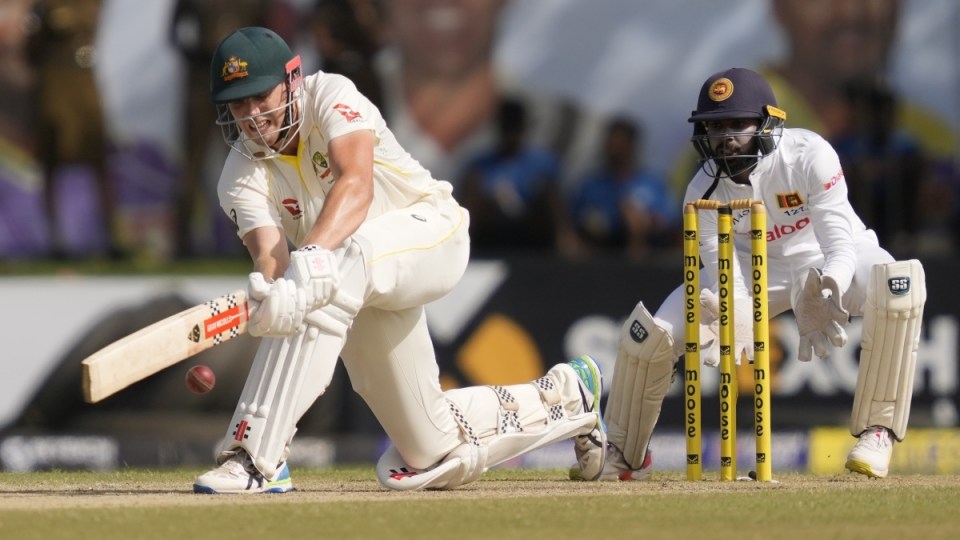 Cameron Green helped bat Australia to relative safety in Galle after a morning of chaos and destruction caused by heavy rain and wild winds.

On a pitch Usman Khawaja has already described as one of the toughest he has ever played on, the early advantage looks crucial given the way the ball continues to turn.

Australia has now already scored more runs than it did across both innings on a similar Galle wicket in 2016, where it surrendered the series to Sri Lanka amid a 3-0 flogging.

The tourists’ effort came after more than two hours of play were lost to a morning storm that caused the roof of a makeshift grandstand in the stadium to collapse.

Sightscreens were also torn down and a glass panel in a marquee smashed, as gusts of more than 60km/h thrashed the coastal city.

Fortunately, no-one was injured and ground staff placed tyres over covers in a bid to keep them down across the outfield and pitch.

When play finally began, it was Green who did the damage to the hosts.

Brought to the wicket after Travis Head went for six in the first over, the West Australian used his long legs to his advantage to nullify the impact of the spinners.

Three of his six boundaries came on the sweep shot, while he also cover drove nicely in a knock that controlled the tempo of the game.

“It took a lot of courage,” Khawaja said.

“Where his game is at right now for a young 20-year-old kid, it’s great to see him well beyond where a lot of us were on the sub-continent at 20.

“A lot of the things we have learned as senior batters around the group. It’s great to see that knowledge being passed on.”

Green’s knock exemplified Australia’s attempts to go after Sri Lanka’s tweakers, with only Ramesh Mendis (4-107) having any sustained success.

The visitors have scored at a run-rate of 4.53 in their first innings, with the hosts’ spinners sending down 61 overs without one maiden.

By comparison, Australia’s run-rate sat at 2.83 back in 2016 when Rangana Herath and Dilruwan Perera dictated terms and spun them into a web.

“The way he came out and batted is a credit to Greeny,” Khawaja said.

“Most of it was just about intent. He was doing beautifully, executing beautifully. Going down the deck, sweeping, going back in his crease.”

Khawaja had also made a clear effort to unsettle the bowlers in his 71, as he passed 50 for the seventh time in his past 10 innings since his Test recall.

After steadying the ship late on day one, the opener continued to employ his tactic of reverse sweeping to go after runs against the spinners.

Alex Carey struck a neat 45 as he played well square of the wicket, while some late power-hitting from Pat Cummins (26 not out off 16 balls) rammed home Australia’s advantage.