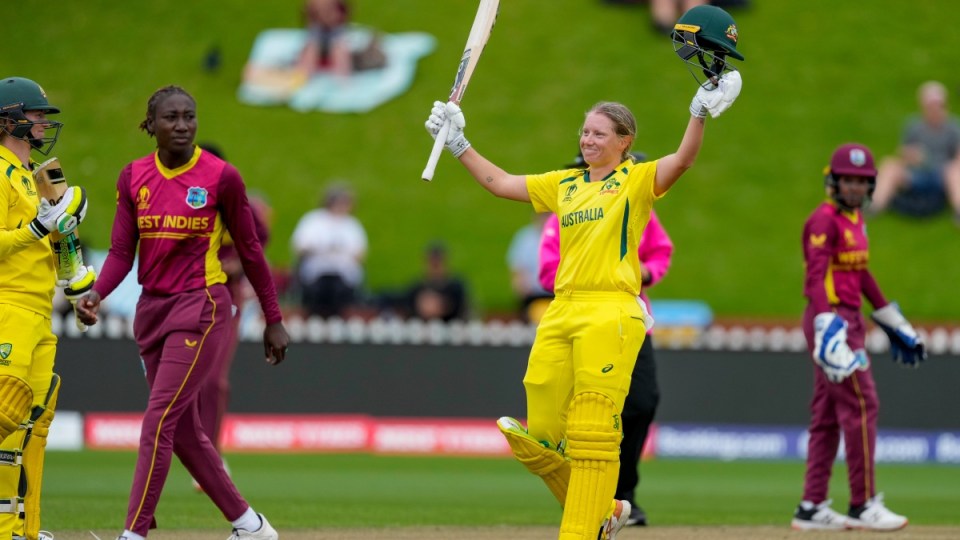 Australia will have the chance to reclaim the Women’s World Cup after crushing the West Indies by 157 runs in a rain-shortened semi-final.

Alyssa Healy struck a magnificent 129 and paired with Rachael Haynes in a 216-run opening stand as Australia made 3-305 in Wellington on Wednesday.

Set a world record ODI chase to win, the West Indies were never seriously in the contest, held to 8-148 after 37 overs, with two players unable to bat.

The superb win, Australia’s eighth in succession in New Zealand, sends the world No.1 back to the final for the first time since 2013, where it will play either England or South Africa.

Light drizzle delayed proceedings at Wellington’s Basin Reserve and compressed the match into a 45-over contest played in persistent fog.

Sent in by West Indies skipper Stafanie Taylor, Australia’s openers were alert to the dangers of the new pitch, safely navigating the powerplay.

Healy waited 12 overs before her first boundary before exploding, striking her second fifty in just 28 balls and finishing with 17 fours and one six.

“It wasn’t a flat wicket my any means … it was a bit tennis ball-y early,” Healy said.

“We knew if we invested a bit of time – as cliched as that sounds – we’d be able to cash in and we were able to do just that.”

Healy also overcame rotten form in the capital where she had made just 38 runs in four outings over the past fortnight.

The West Indies looked demoralised in the field, squandering a glut of chances to secure a breakthrough wicket.

Hayley Matthews and Shamilia Connell both dropped sitters to dismiss Haynes just after her half-century.

It got worse for the Caribbean side, with Anisa Mohammed – a replacement for COVID-struck spinner Afy Fletcher – pulling her hamstring chasing a Healy boundary soon after.

Australia’s openers eventually departed in the 33rd and 36th overs, Healy top-edging an attempted tonk and Haynes finding Deandra Dottin at cover to miss out on another World Cup century.

The huge opening stand allowed the rest of the Australian batters to swing freely.

Mooney left her mark as the West Indies began their improbable chase, diving to take a one-handed catch to dismiss Rashada Williams for a duck.

When Tahlia McGrath was introduced and claimed dangerwoman Dottin (34 off 35) with her third ball, the West Indies were still more than 250 runs from home.

Alyssa Healy is Player of the Match for her blazing century! #CWC22 pic.twitter.com/h69k1Cmfdn

The required run rate surged after tight spells from McGrath and Annabel Sutherland, and kept climbing with the introduction of spinners Jess Jonassen , Alana King and Ash Gardner.

Healy capped her superb day with a sharp run out of Chedean Nation.

Meg Schutt (1-8 off five overs) and Jonassen (2-14 off five overs) were Australia’s sharpest bowlers, while Darcie Brown finished with a disappointing 0-37 off six overs.

Attention now turns to Christchurch for Thursday’s semi-final between South Africa and England, and Sunday’s final, both at Hagley Oval.