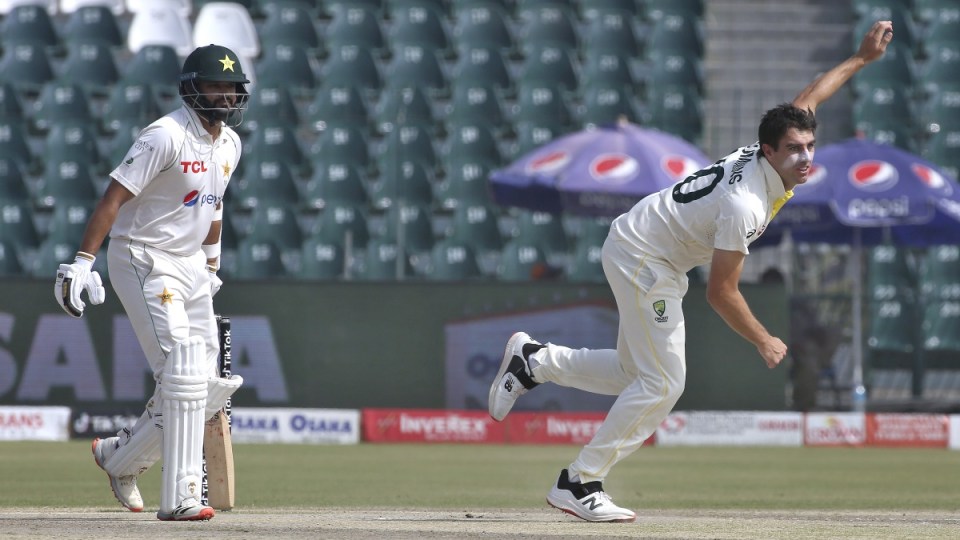 A Pat Cummins master class has given Australia a genuine opportunity of securing victory over Pakistan in the third and deciding Test in Lahore.

After managing just three wickets in the first 106 overs, Australia ended Pakistan’s steely resistance by running through the home side in dramatic style in the final session on day three.

Led by Cummins’ outstanding 5-56, Australia rolled Pakistan for 268 on Wednesday to take a first-innings lead of 123.

Openers David Warner and Usman Khawaja then survived three nervous overs to take the visitors to 0-11 in their second innings before stumps were called.

The innings ended abruptly, Pakistan losing 4-0 in its last 10 balls.

The star quicks were able to get the ball reverse swinging and Pakistan’s lower-order had no answers.

Cummins became the first fast bowler in the three-Test battle for the Benaud-Qadir Trophy to claim a five-wicket haul.

Pakistan was looking comfortable at 3-248 before Starc clean-bowled No.5 Fawad Alam and wicketkeeper Mohammad Rizwan in the space of four overs.

Cummins then knocked over tailender Sajid Khan with an irresistible piece of bowling three overs later to see Australia on its way.

Pakistan captain Babar Azam (67) fought hard but not even he could contain the outstanding bowling of Starc and he was the second last batter out, trapped lbw.

After starting the day at 1-90, Pakistan seemed more intent on occupying the crease rather than quickly chasing Australia’s first-innings total of 391.

Cummins’ spectacular catch off his own bowling was the highlight of the second session.

The skipper dived to his right to claim a stunning return catch to end Azhar Ali’s gritty resistance on 78.

After going wicketless before lunch, Cummins and veteran spinner Nathan Lyon struck once each in the middle session.

Shafique and Ali had batted through the opening session, adding a further 69 runs to the overnight tally of 1-90.

Despite claiming Shafique, Australia’s DRS woes continued as it wasted its third and final review of the innings.

Australia decided to use a review when Lyon trapped Alam on the pads, but replays revealed the ball hit Pakistan’s No.5 outside the line of off-stump.

Steve Smith put down a tough chance in the final over before lunch, and again could only watch as an edge flew straight past him in slips during the second session.

The series remains deadlocked at nil-all, with the likelihood of a result in the third Test again appearing slim.