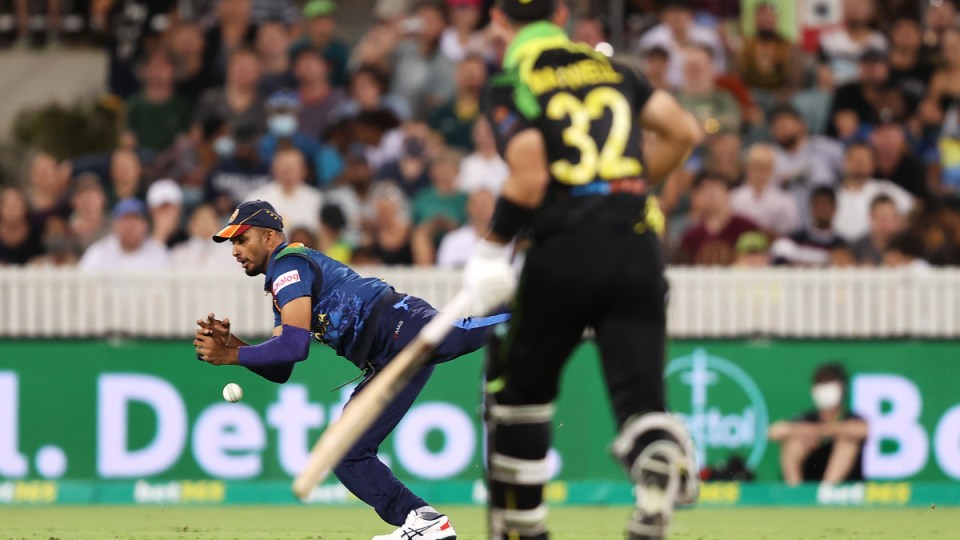 Australia has wrapped up the T20 series against Sri Lanka with a six-wicket win at Manuka Oval on Tuesday night.

In a match in which they were rarely threatened, three wickets from Kane Richardson restricted Sri Lanka to 6-121, a target the Aussies cruised past thanks to a 50-run partnership between Aaron Finch and Glenn Maxwell.

The win gives Australia a 3-0 series lead ahead of the final two games in Melbourne.

Our world champions take the series against Sri Lanka! 🙌

Another excellent display from our T20 boys – the final two matches of the series will be played in Melbourne #AUSvSL pic.twitter.com/fXokl3Dupb

An explosive Maxwell made merry with the bat, clubbing two sixes in his 39 off 25 balls, with a monstrous switch-hit the highlight of the chase.

Finch, not opening the batting for just the ninth time in his 86-match T20I career, played patiently for his 35 off 36 balls.

Ben McDermott fell in the first ball of the innings, nicking spinner Maheesh Theekshana to slip, while makeshift opener Ashton Agar made 13 before he was out lbw.

First baller for McDermott… Sri Lanka defending 121 in this chase.

After Maxwell holed out to deep mid-wicket, Josh Inglis continued his fine form making 21 not out, helping Australia seal the win with 19 balls remaining.

Theekshana was clearly Sri Lanka’s best with the ball, taking 3-24 off four overs.

Sri Lanka lost paceman Nuwan Thushara after just seven balls of his spell with a side injury.

Earlier, stifling bowling limited Sri Lanka to 6-121, at one stage denying the hapless visitors a boundary for six straight overs.

An unbeaten 39 from captain Dasun Shanaka was their most telling contribution, and Pathum Nissanka chipped in with 16 before a staggering diving catch from Daniel Sams saw him dismissed.

Richardson had the best figures of 3-21, while Agar took 1-14 from his four overs.