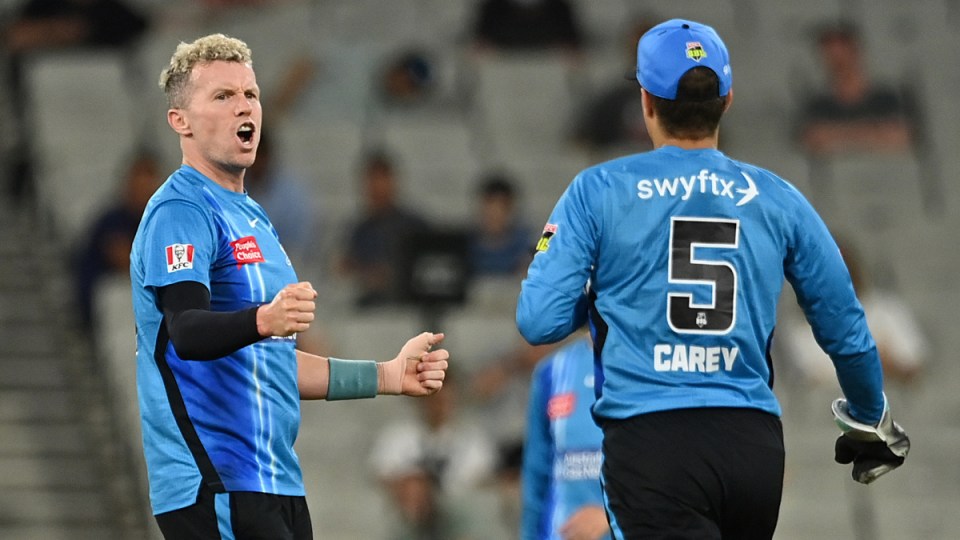 Adelaide Strikers are alive in the race for the BBL title after beating Sydney Thunder on Sunday night. Photo: AAP

Adelaide Strikers have moved to within one win of the BBL decider after defeating Sydney Thunder by six runs in a pulsating Knockout final at the MCG.

After posting 6-184 on Sunday night, the Strikers made it six straight wins and set up a date with Sydney Sixers in the Challenger on Wednesday night after Thunder replied with 6-178.

Harry Conway (2-33) had Ben Cutting caught on the boundary the next ball to seal the victory before narrowly missing a hat-trick when Jon Wells spilled a tough outfield chance.

THE ADELAIDE STRIKERS ARE GOING TO THE CHALLENGER!

That game had EVERYTHING! #BBL11 pic.twitter.com/arHxnj8nOd

Jason Sangha (61) and Ross (56) turned the tide Thunder’s way with an enterprising 90-run stand after captain Usman Khawaja was controversially sent packing in the seventh over.

Umpire Donovan Koch’s soft signal was out, which television umpire Ben Treloar agreed with, despite replays appearing to show the ball brushing the turf as it went into Fawad’s right hand.

“No, I didn’t (think it was out),” Khawaja told the Seven Network.

“I thought at the end of the day the soft signal cost me.

“It looked like a blade of glass 100 per cent touched the ball.

Strikers captain Peter Siddle claimed two wickets in the 17th over, including Sangha, as Thunder took the power surge, before Conway held his nerve at the death.

Earlier, England import Ian Cockbain (65) continued his rich run of form since arriving in Australia 11 days ago after Short (39) and Carey (23) got the Strikers off to a flier.

Daniel Sams endured a nightmare early, conceding 19 runs in the third over and dropping Short on 13 with an uncharacteristic piece of misjudgment in the outfield.

Sams redeemed himself the following over when he launched himself high to take a screamer and dismiss Carey.

A blinder from Daniel Sams!

Over his shoulder, Sams holds on to a magnificent catch #BBL11 pic.twitter.com/EZjtx6SfvT

But Cockbain, after a sedate start, took apart the Thunder attack which, apart from leg-spinner Tanveer Sangha (2-15), was off the boil.