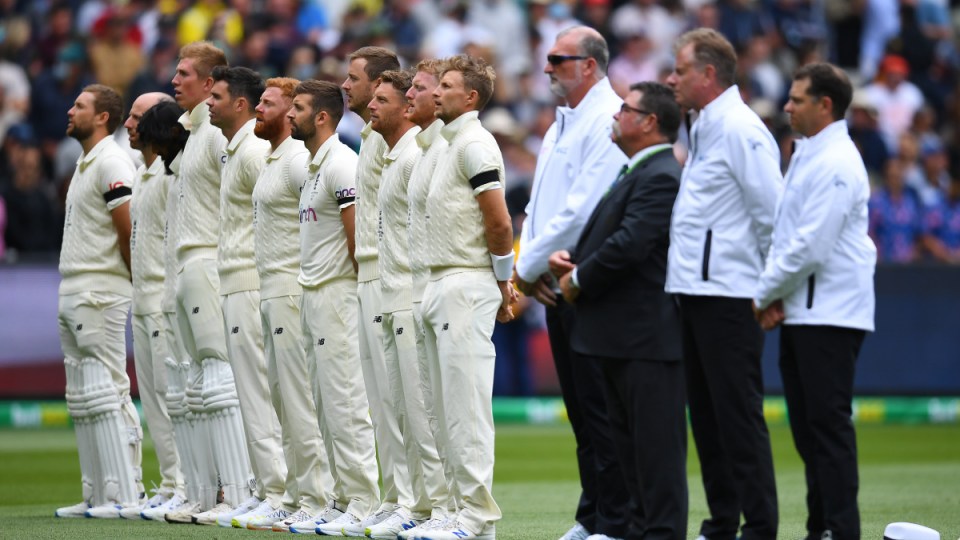 The day two start has been delayed after an England family group member tested positive to COVID-19. Photo: AAP

The Boxing Day Test and entire Ashes series is hanging by a thread after four non-playing members of England’s touring group tested positive to COVID-19.

In the biggest threat to the series so far, Cricket Australia has confirmed two family members and another two support staff have returned positive rapid antigen tests.

England players were initially ordered to stay back in their team hotel on Monday morning, just an hour before the scheduled start of day two.

However their entire XI have since returned negative tests to rapid kits, and it was confirmed play will start 30 minutes late and no time lost.

Concerns will linger over the England camp however, with players to take full PCR tests on Monday.

“Cricket Australia has been informed that two members of the England Cricket Team’s support staff and two of their family members have returned a positive COVID-19 Rapid Antigen Test,” a statement read.

“The affected individuals are currently isolating.

“The entire playing group and all other support staff have undertaken Rapid Antigen Tests this morning and all have tested negative.

“The England Cricket team will also have PCR tests today, and both teams will take extra precautions throughout play. Both playing squads remain unchanged.”

If further dramas hit, like-for-like substitutes can be used after being approved by the ICC last year for players showing symptoms.

But a full-scale outbreak would no doubt spell a disaster for Cricket Australia and the series, with each Test a multi-million dollar product for the sport.

England has already had two tours abandoned mid-trip since the start of the pandemic, following rising concerns around cases around the playing groups in both South Africa and Sri Lanka.

The final Test of England’s home series against India was also postponed earlier this year after cases in the India camp.

The latest incident comes after Pat Cummins was ruled out of the Adelaide Test after becoming a close contact of a COVID-19 case.

The case has forced a complete overhaul of their commentary team, with what is essentially their Big Bash crew called in to cover the match.