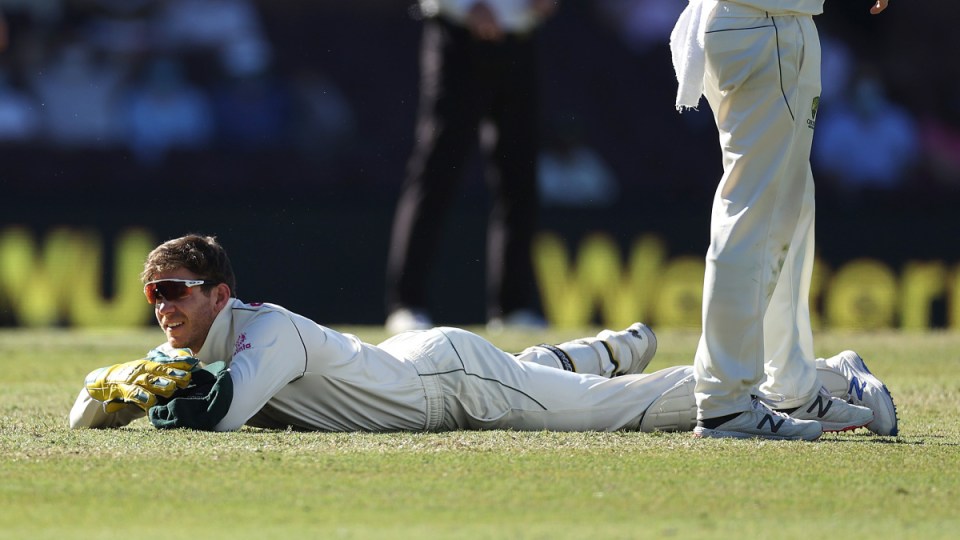 Tim Paine has been keeping a lower profile than this dive for a catch during the recent India Test series. Photo: Getty

Tim Paine’s planned return from a lengthy injury lay-off was skittled by wet weather and ended with a swift, tight-lipped walk through a media scrum.

The former Test skipper stepped down from the role on Friday after it was revealed he sent lewd text messages and an inappropriate image to a female colleague in late 2017.

Paine is available for selection in the first Ashes Test against England on December 8 but questions are arising over whether he is still the best wicketkeeper for the job.

The 36-year-old had Saturday locked in for some weeks as his comeback from neck surgery for club side University at Hobart’s Queenborough Oval.

A wet outfield forced play to be abandoned in the mid-afternoon.

Paine wasn’t sighted at the ground before walking from the dressing sheds to a car. He didn’t make any comment to media.

Chairman of selectors George Bailey also declined to speak to journalists at the ground and was spotted leaving via a side gate.

He is expected to take to the field in a second XI match for Tasmania against South Australia starting Monday.

There are no back-up wicketkeepers to Paine in Australia’s 15-strong Ashes squad, but glovemen Alex Carey and Josh Inglis are among Australia A fringe players.

“If he wasn’t the captain, would he have been picked in the first Test knowing the little amount of cricket or the form he has put on the board because of it?,” former Test opener and Tasmanian Ed Cowan told ABC radio.

“Without being the captain, I am actually surprised he didn’t retire (on Friday) because he is now under the pump and it’s the double whammy effect.

“What really is there to gain from a cricket point of view? I am surprised he is still playing, to be honest.”

Cricket Australia chair Richard Freudenstein on Saturday said Paine would not have survived as skipper in 2018 under the sport’s current administration.

Paine was appointed to the role in March 2018 after the ball tampering saga in South Africa forced Steve Smith to step down.

Cricket Tasmania says the lewd messages came to their attention in mid-2018 when the former employee was charged with stealing.

A subsequent Cricket Australia investigation that year cleared Paine of breaching the organisation’s code of conduct.

Cricket Tasmania chairman Andrew Gaggin has said Paine’s behaviour was not condoned but no further action was required because the messages were consensual.

Paine apologised to his family and the woman involved during a teary press conference on Friday but didn’t take questions.