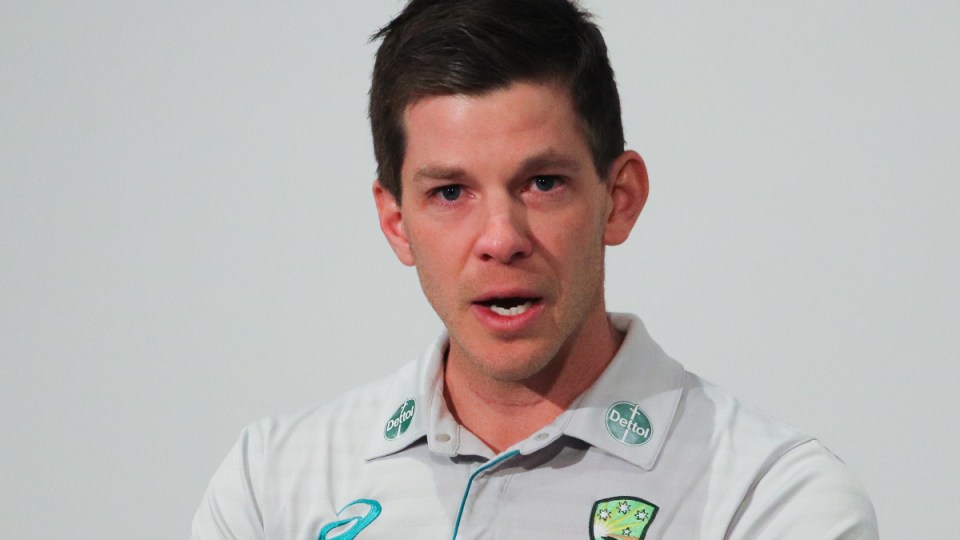 Former Test captain Kim Hughes says it’s staggering that Tim Paine was kept on as Australian captain even though officials knew of the sexting complaint against him.

During his tearful resignation on Friday, Paine said his text exchange with a female colleague was investigated by Cricket Australia and he had been exonerated.

The Herald Sun is reporting on Saturday that Paine knew at the time of sending the woman the lewd messages that his behaviour could potentially cost him his job.

In one of the texts Paine reportedly wrote to the woman that he would be “so ­f–ked” if it came to light he had sent an explicit image of a private part.

Paine is scheduled to take to the field on Saturday to play first-grade cricket in Hobart.

He resigned from the captaincy on Friday after the newspaper revealed he’d been involved in the sexting exchange with a female Cricket Tasmania employee in late 2017.

The pair did not have a relationship but had been texting for several months as part of their work, mainly for organisational reasons.

Cricket Australia reportedly received a complaint three months after the incident which occurred just months before he was made captain and on the eve of his Test return.

Cricket Tasmania says the matter only came to attention in mid-2018, after Paine had assumed the captaincy in the wake of the ball-tampering scandal in South Africa that cost Steve Smith the position.

With Paine cleared of a code of conduct breach, Cricket Australia bosses kept the wicketkeeper-batsman in the position despite his elevation to the leadership being based around a good guy image seen as needed to restore pride and respect in the Test captaincy.

Hughes, who tearfully quit as Australian captain himself in 1984, said it was astounding Paine held onto the position once those in charge knew of the sexting matter.

“(Paine) did what he had to do (by resigning) but what I find staggering is that Cricket Australia reviewed the situation and did nothing,” Hughes told Five AA radio in Adelaide.

“Integrity? You’ve got to be kidding me!

“For God’s sake. You found that out and then said ‘well that’s still acceptable’ and to appoint him captain?

“Give me a break. It’s absolutely staggering.”

Most of those at the top of Cricket Australia at the time of Paine’s original appointment, including chief executive James Sutherland, have since left their positions with the body undergoing a comprehensive hierarchy change.

The players’ union meanwhile issued a statement reiterating its support for Paine, who has insisted he wants to play on for Australia in the upcoming Ashes series.

“While regrettable, this was an historical mistake that was a private matter between consenting individuals,” the Australian Cricketers’ Association statement said.

“Tim fully cooperated in an integrity investigation by Cricket Australia in 2018 in which he was exonerated … while Tim has clearly made a mistake, he will continue to have the full and unequivocal support of the ACA.”

When Paine became the 46th Test captain three years ago, there was a ton of uncertainty about whether the appointment would work.

The wicketkeeper had considered retirement only a few months earlier and at the start of the 2017-18 season, he wasn’t even a regular member of the Tasmanian team.

At the time, Australian cricket needed someone with a rock-solid reputation to take over after Steve Smith’s tearful Sandpapergate resignation.

Tim Paine was just the man for one of the biggest crises in Australian sporting history.

But this family man and all-round good guy was hiding his own dirty secret that would come back to haunt him.

And now the Australian role that is seen as second in profile only to the Prime Minister’s is in disgrace, again.