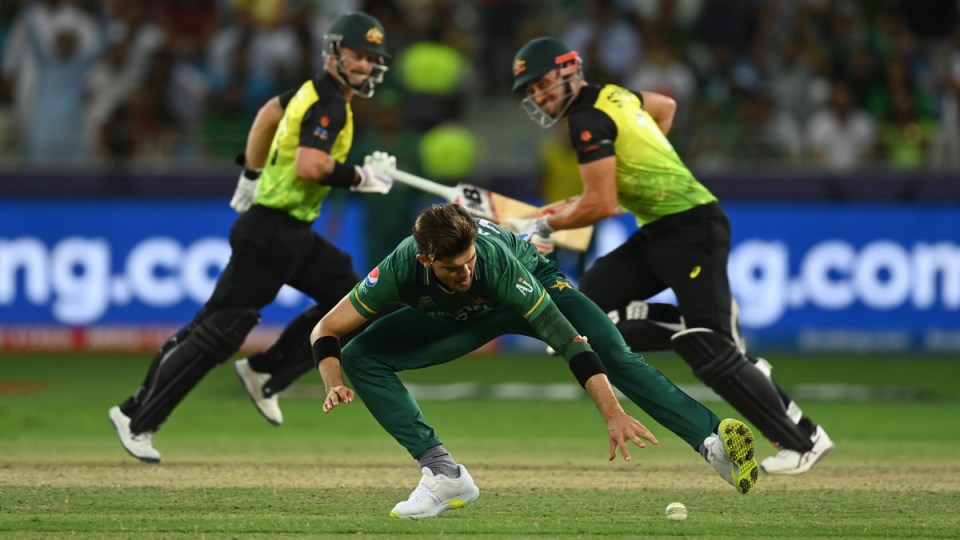 Australia is one win from a maiden Twenty20 World Cup title after Matthew Wade and Marcus Stoinis pulled off the great escape against Pakistan.

In a dramatic Dubai semi-final, Australia’s asking rate went to beyond 12 runs an over before Wade smashed three straight sixes to win it with six balls to spare on Thursday.

It was enough to set up a Sunday night decider against New Zealand, in a repeat of the 2015 ODI final.

But for so long both before and during Wade’s unbeaten 41 from 17 balls, Australia’s pursuit of Pakistan’s 4-176 for a spot in the final looked unlikely.

Khan also had David Warner caught behind for 49 despite replays showing he’d missed the ball, as Australia’s hopes looked gone when he failed to review.

And when Glenn Maxwell became the fourth victim for Shadab, who recorded the best-ever T20 World Cup semi-final figures by a bowler, Australia were in a bigger hole.

However, just as Michael Hussey did 11 years ago in St Lucia, Stoinis and Wade broke Pakistan’s hearts.

The pair let the equation get down to 62 from five overs before Stoinis (40no from 31) got the margin back to 22 from the last two overs.

Then Wade exploded, with his last 33 runs coming from eight balls.

Dropped by Haris Rauf with 20 needed from 10, Wade hit the next three balls into the stands to seal the match with six balls to spare.

He ramped Shaheen twice and flicked him over the legside once in a brutal 147 seconds that ended the previously unbeaten Pakistan’s tournament.

“Marcus was really confident we would get them, but I was a little unsure when I went out there,” Wade said.

“The rate was getting up. But he reassured me he would find the boundary enough to get it deep.”

Australia is also timing its run brilliantly, and will enter the final as favourite.

The team was far from its best with the ball in the semi-final, as pacemen faltered and they missed chances in the field.

Mohammad Rizwan, who spent two days in hospital with a chest infection this week, was dropped on zero and 20 before he made 67 from 52.

Fakhar Zaman thumped an unbeaten 55 from 32 after being dropped on 40, while Josh Hazlewood went for 0-49 from his four overs.

Mitchell Starc also went the distance in his last over but bowled well for his 2-38, while Pat Cummins finished with 1-30.

But again Adam Zampa bowled brilliantly to claim 1-22 and remove key man Babar Azam, with the legspinner also likely to be a force in the final.

Winning experience also shapes as a factor, with Australia the oldest team in the tournament and all that maturity paying off at the death against Pakistan.

“Experience is key in these games,” Wade said.

“Even though we lost a few early wickets and things weren’t really going our way early, there was no real panic in the dressing room.

“We all thought it was going to be a young man’s game when T20s first came in.

“But certainly the more experienced players tend to have a little bit more success.”

‘It’s been too long’: Australian actor Eric Bana returns in follow-up thriller to The Dry
Marcus Harris locked in to open for Australia in first Ashes Test
Today's Stories