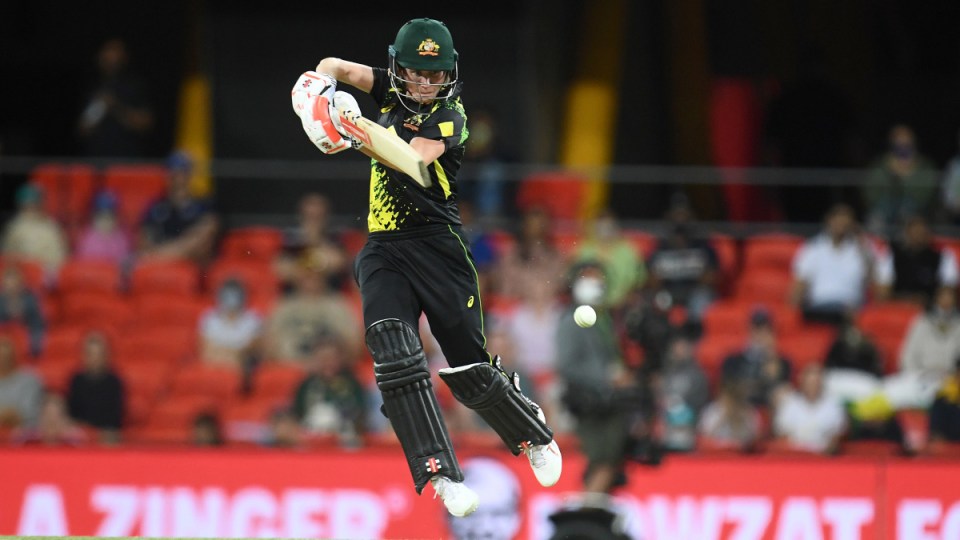 Beth Mooney scored 61 as Australia posted a 14-run win over India in their third Twenty20 match on Sunday. Photo: AAP

Australia has completed its multi-format series against India with a 14-run victory in the third women’s Twenty20 international on the Gold Coast.

Having set the India a target of 150 to win Sunday’s match at Metricon Stadium, the tourists reached 6-135 in reply, ensuring Australia claimed the series nine points to five.

Opener Smriti Mandhana threatened to make the run chase interesting with a half-century, but when she fell for 52 off 49 balls with just over five overs to play, her team’s hopes went with her.

India captain Hamanpreet Kaur (13 off 16) was caught by opposite number Meg Lanning off the bowling of teenage quick Annabel Sutherland (1-13) in the following over to hammer the final nail in the coffin.

The #TeamIndia left-hander brings up her 14th T20I half-century! 👍👍 #AUSvIND

Medium-pacer Nicola Carey, who snared the key wicket of Mandhana, was the pick of Australia’s bowlers with 2-42 although her final over went for 21 with Richa Ghosh ending the innings with a late flurry to finish unbeaten on 23 off just 11 deliveries.

Spinners Ash Gardner (1-22) and Georgia Wareham (1-15) were the other wicket takers for the hosts, on a day when star all-rounder Ellyse Perry didn’t bowl.

Earlier, a half-century to Beth Mooney lifted Australia to 5-149 after it was sent in by Kaur.

Lanning’s dismissal was memorable for all the wrong reasons for the Australian skipper, hitting her own stumps as she attempted a late cut off left-arm spinner Rajeshwari Gayakwad (2-37).

Just as Australia appeared to be in trouble when Perry’s dismissal left them 4-73, for the third time this series Mooney was aided in setting the total by all-rounder Tahlia McGrath.

The match winner in Saturday’s second T20I, McGrath belted an unbeaten 44 to lift Australia’s score to a healthy one.

Australia’s focus now switches to domestic duties with the WBBL starting on Thursday before hosting England in the women’s Ashes in January.